TV Zone #142 - Spoiler Warning for the finale. Report from the MTR Event.

"She lived by the sword, and ultimately she died by the sword. Xena: Warrior Princess has been a constant staple of Cult Television for the past six years. Lucy Lawless and Renee O'Connor discuss the Warrior's Fate." 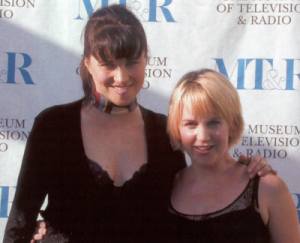 So it's all over for Xena. After six years of the warrior princess yi- yi-yi-ing her way into battle, the phenomenally popular Fantasy series has joined its parent show Hercules: The Legendary Journeys in the tv history books. On June 19th 2001, the show's stars Lucy Lawless (Xena) and Renee O'Connor (Gabrielle), joined with producers Rob Tapert and RJ Stewart at the Museum of Television and Radio, to discuss their thoughts on the end of the series.

"The ending we chose..." Stewart begins tentatively, "the reason we did that; when this series began, Xena had been created on Hercules as a villain. To redeem herself, Xena had to turn away from violence - but that's not going to make a tv series, right? So she hears Gabrielle in distress, she comes to the rescue, and then she's on a mission to redeem herself. But we've always withheld that concept of her forgiving herself about what she's done, that she's had to pay a great price. She's basically a war criminal. So fast forward six years and we're working on the final episode, and we wanted to do a Japanese ghost story, and hell if you're going to do a Japanese ghost story, Xena's got to be the ghost! So we thought, wait a minute, the ultimate redemption for Xena may be here."

In the final episode, A Friend in Need Part 2, Xena is killed in Japan having been hit by arrows and finally beheaded. It wasn't the ending some fans had expected. "I don't know why people expected us to walk off into the sunset," Lucy Lawless points out. "It was the strong choice, the bold choice, the risky choice, and I know some people don't like it, but the characters come full circle. She lived by the sword, and by golly she died by the sword!"

"However," he adds cryptically "if there was an opportunity to bring Xena back, well, there's no better task for Hercules and Ares and all our other characters. But no, for now this was the right choice. RJ and I talked about it eons ago."

So does Lucy feel that her character evolved at all over the last few eons?

"I'm the last person who could comment on that perhaps ask RJ!" Lawless laughs, neatly passing the buck. Renee O'Connor, eager not to be overshadowed, pipes in with her thoughts.

"Actually it's funny, because I think at the start Xena would have nothing to do with the sympathetic side of the people that was helping, and then as she was with Gabrielle more and more, she changed her! She softened up, absolutely."

Rob Tapert suggests that Gabrielle's character might have been a catalyst for Xena. "Gabrielle vas a great character because Xena couldn't change. Although she could soften a little bit, she was always going to be Xena. It was Gabrielle who was allowed to ask all the questions and pose the moral choices and go down the paths in life to explore travelling with this warrior woman where a lot of people get killed and hurt. Not only did Renee bring that to life, but her character allowed us an avenue to explore growth in character, because Xena had to be Xena."

With Xena being a spin-off series from the already hugely successful Hercules, was it a surprise that the new series became such a hit? RJ recalls the earliest appearance of Xena. "I saw tapes of Lucy in the rough cuts of the Hercules episodes. Right away I responded to Lucy in a way I think other people responded. And then with Renee, it worked so perfectly."

After six years of stories, there is always a danger that a series will run out of steam. Tapert refutes the that this was the case with Xena however. "There is a bunch of stories I'd like to tell, some that I still could find a way to tell one way or the other," Tapert promises.

"Not now she's dead.." Lucy Lawless interrupts her husband with mock bitterness in her voice. "I know she's dead!" Tapert replies with a glint in his eye. "But she was dead at the end of the fourth season! Anything can happen. We wanted to do a musical episode. I would have killer Lucy and Renee because they played four roles and been in every single scene in different outfits. We worked really really hard, and the rights proved too hard to get. But we chased a lot of things that didn't come to fruition, so forget 'em."

Although the musical episode might not have ultimately come to anything, there were plenty of other light-hearted shows scattered throughout the show's run. Did Lucy and Renee prefer the comic episodes or those with a more serious side to them?

"I would always like comedy." Lawless says without hesitation. "Because we would laugh all day long."

"The same for me," adds O'Connor "Comedy. It would be much more entertaining for us. I always loved working with Ted Raimi [who played Joxer] as well, and the three of us together had such a ball. I also keep remembering the Cinderella episode [If the Shoe Fits] and Lyre, Lyre, Hearts on Fire when Ted and I were having a dance and it broke into a disco. It was so outrageous and unlike any of the episodes where it's more of an epic adventure. I quite like that."

So, what would the pair consider to be the show's place in History then? "I think that it revived the female action hero, and spawned a lot of children," Lawless muses. "And showed that chicks can hold a show," O'Connor adds, emphatically.
"It's not a cop drama specific to New York. It's universal themes", explains Lawless.

So would the two like to appear together in a production again? The knowing exchange of glances and ensuing giggling seems to imply that they would.

"Yeah, in comedy," Lawless states. "It's almost like we grew up together. Your late twenties is a period of tremendous growth, and Renee and I went through a lot side by side. There's a lot unspoken between us. We don't have to explain to one another certain things. So yeah, I think we'd be great in a comedy series."

As well as all the comedy, Xena got itself a reputation for tackling some serious issues, as well as upsetting a few people along the way when broaching the subject of religion. "Rob and I have comparative religions and spirituality, and of course our version of it is always filtered through our madness!" Stewart laughs, but plays down suggestions that the show said anything too profound. "You don't look at Xena to study world religions! It's something that he and I always liked and explored quite a bit. It's fun to have Xena and Gabrielle explore different views."

"It's pretty fertile ground too, isn't it?" Lawless interupts. "When you go to other cultures and other philosophies, and, you know, when you're out of ideas!"

Renee O' Connor is pragmatic on the subject. "I don't think we ever realized the effect we were having on people until an episode would air and suddenly you've personified a certain god in a way that they weren't pleased with, [such as in The Way]. We never took it too seriously."

Lucy Lawless is quick to respond when asked what her favourite moment on the show was.
"I always liked Is There a Doctor in the House? where Gabrielle came back to life. Maybe it's for personal reasons. It was the first time I had given it all up on screen. You had to let go of all control, you can't think about how you appear, or if you're being pretty. I think that was the first time when I was able to do that as an actress."

Conversely, RJ's favourite moment is the memory of one of Lucy Lawless's earliest appearances. "My favourite moment was in the pilot. It's not particularly profound, but it was the first time I saw a bit that I wrote. Where she's spinning on the pole and whipping around kicking everyone in the face. When I saw it cut together I thought, 'Wow! This is as cool as shit!"'

Renee O' Connor picks out a moment she remembers all too well. "There was one episode which was the most challenging in The Abyss. That was so difficult having to face [the cameras] while covered in mud. But it was wonderful, because I learned more about myself than I ever thought I would on a television show and it brought out aspects of me that I didn't think were there."

Were the shows often tiring to make then?
"The first couple of years you're on a kind of high of the newness and everything", Lawless decides. Renee O'Connor nods in agreement. "You get into a routine, and the first week you're just exhausted and can't believe you're performing these hours, but then everyone's working harder than you are, and you rise to the occasion."

So what of the future? Might Xena return one day? Rob Tapert has a unique view on this. "I think there's a seven-year-old walking around out there who is going to play Xena one day, and Lucy and Renee are going to be two old timers."

"Yeah, in the background," Lucy Lawless adds, and then affects an elderly woman's voice. "They should have asked me to play it! I can't believe they didn't ask! Ah well, there you go."