(This review probably has some Season  4 spoilers, and was written while actually listening to the CD, so I may get a bit excited or emotional at times, dont worry about it:)

With shattered legs and crippled soul, I went east, to lose myself in vengeance; not against Caesar, but the entire human race.

The reason I hold my XWP soundtracks in such high regard is because of their wonderful ability to conjure up memories  from the show itself. Play me the music that accompanies an emotive or amazing scene, like Xenas beach crucifixion, or the Gab Drag and Im pretty much guaranteed to lose all powers of speech, forget what Im doing at the time and just become totally absorbed in the sounds and with mentally recreating whatever scene accompanies the music.

With this in mind, it was with huge anticipation that I purchased the fourth XWP soundtrack (approximately £19 from cdnow.com) Would it live up to the previous three? What would be on it? Is there any instrument Joe LoDuca cant use???

This CD is arranged differently to its predecessors. Whereas they were basically random songs from a set of episodes (Im not including The Bitter Suite in this review, as it was just one episode - not a  compilation album.) CD#4 is sorted either by episode or country. The first seven are under the heading Chin: The Debt then theres five entitled The Destruction of Hope: Family Affair, then India: Devi/Between The Lines/The Way, (the entire India arc) - then Turangi: Adventures in The Sin Trade and finally two Bonus Cues at the end.

Rather than go through each song, Ill just comment on the ones that have stuck in my mind so far, bearing in mind Ive only heard it four times, this list may change, but its good enough.

Eschewing the Opening Titles that Volumes 1 and 2 began with, CD#4 begins with Caesars Mark.  Or as you may know it, the fabulously epic-sounding horse-back-fight-scene music from The Debt - that sounds like a mix of music from The Omen and Bram Stokers Dracula 

And I defy you not to growl Xena! in an Alti voice at the point in the track that corresponds to Xena and Altis first meeting in Between The Lines (it was also played in that ep) - its irresistible!

Theres also The Bath and  Taking Flight - both very lyrical, uplifting and peaceful - which I suppose is suppose to evoke the spirit of Lao Ma, the woman whom both scenes feature heavily, and which demonstrate her power and her way.

My favourite from the Family Affair section has got to be Hello Beautiful - that wonderfully eerie music that plays when Hope tends the Destroyers wounds. So subtle, yet distinctively menacing at the same time

From the India series, the only one I can recall with any real interest is Tataka - from Devi, the one that plays when Xena discovers the demons identity, and you first get to see Gabrielle dressed in the demons outfit, sitting on her throne. It starts off pretty slowly and low-key, but builds to a shocking climax that still makes me shiver when I hear it.

Strangely enough, although The Way is still banned - theres four music tracks from it. Ones even called Krishna tut tut. 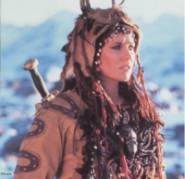 The next section, and for me, the high point of the CD, the Adventures in the Sin Trade tracks.  I utterly adored these episodes, and revelled in the tribalistic chanting that formed a majority of the soundtrack.

It starts with Amazon Pyre - the bit where Xena wails over the campfire over the loss of her soulmate, then theres The Beserker - one of my favourites, and a track that sounds in places like the soundtrack to seminal Japanese anime Akira.
One of the shortest tracks on the CD is next, Making Camp/ Drinking Blood - complete with interesting boinging noise.
Then, the longest track on the CD is Xena vs. Alti (though they criminally mispelt it Alte on the back of the CD - doh!) - an extremely visceral and aggressive track, that, yes, also manages to includes the music that accompanies the crucifixion scene, which although slightly over-shown in Season 4, is still a gorgeous and highly evocative piece of music.

The last Adventures in the Sin Trade  track is Released/ Spirit Dance - an almost indescribably beautiful track which evokes a feeling of almost religious epiphany, after the violence of the previous one, and which perfectly matches the onscreen image of Xena returning to her body to discover her stigmata-like wounds, and the shafts of light surrounding the recently-revived Amazons.

And then, when youve been ground through the emotional mangler of the Adventures in the Sin Trade  tracks, and feel like you cant possibly feel any more, what comes next? What could they possibly add to that?

Yup, the first of the two bonus cues is Everybody Dance Now - the main dance scene music from A Tale of Two Muses - which just made me laugh out loud in surprise the first time I heard it, and is the perfect antidote, and a complete contrast to the heavy stuff of the Sin Trades.  This hilarious piece of pre-Mycean line dancing music is perfectly placed on this CD, just like the scene was in A Tale of Two Muses, silly on its own, but as a wrap up to other things, perfect. Hell, I really liked A Tale of Two Muses anyway, Tara or no Tara, which helps a lot.
And its so irritatingly catchy, I was trying to type this in time to the beat. Sigh.

The second bonus cue, and last track on the CD is called Im In Heaven - the Thirties musical-style song taken from the ballroom scene in If The Shoe Fits - very silly, but funny at the same time, and was written, apparently by Josh Becker and Joe LoDuca.

My only criticisms of this CD, are the lack of information (the cover page opens up to reveal.woo! Five black and white picturesand thats it. Surely it wouldnt have hurt to put some text as well - say a bit about how the music was made, anything like that.
My other complaint is a personal one - and thats that they missed my two favourite bits of music from Adventures in the Sin Trade! Im talking about the Deer hunting scene, and the blood drinking scene (where Xena goes to the Land of the Dead to try and find Gabrielle.)
I suppose they were less music and more noise - but I loved them, and Im marking this down slightly for omitting them. Tsk.

All in all, this is an excellent CD, if my house burnt down, I think Id rescue this first (forget the family..)
Is it as good as the others? Definitely. Better? Well... Time will tell. Like I say, Ive only heard it four times, and Ive found opinions change over repeat listenings. But the overall quality of music is better than the first one (which had too much boring filler music) and it doesnt have those 5 annoying tracks I always skipped like the second one.

Buy it. If just for the tiny, adorable picture of Gabby on the front cover.


Oh, and Im a big, tough, moody guy, yet a combination of the last four songs on this CD usually bring tears to my eyes. I honestly cant give a higher recommendation than that.

As another footnote, Id also to like to mention the bad puns that form the names of some of the tracks, like the track that accompanies Ming Tiens entrance is called Enter The Dragon (groan!) Gab and Xenas reunion in Mings dungeon is called Visit to the Damned (maybe a reference to pod Gabrielle? Geddit?)
And the final fight music from The Way is titled Call to Arms Ha bleedin ha.