Hi, Argo here, intrepid warhorse, and true friend to Xena:Warrior Princess. Welcome to my page where you will find out the REAL story about Xena's adventures. Find out about my adventures, what I really think of Gabrielle, and what I get up to when Xena abandons me. Neigh problem ! 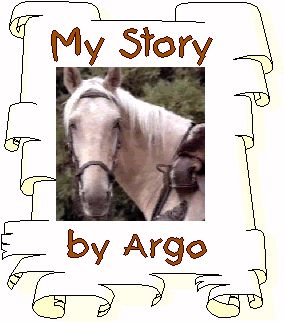 I made my first appearance in the Xena episode Sins of the Past, and clearly Xena had not been with me long as she seemed uncertain whether I was male or female! Just to set the record straight I am a mare, my mother was named Dusty and my Father was some stud introduced to mother only very briefly. I was bought and sold three times before Xena found me. I was separated from my mother as soon as I was fully grown and sold to a chariot salesman as a trainee chariot horse, but there was no way I was going to ruin my beautiful coat tugging carts around. A campaign of non-cooperation soon got me beaten (ouch!) but then sold (hooray!)

My next owner was a soldier. He was in an army that sadly, wasn't too successful. A lucky looting had provided him with the money to buy me, but after a year and a bit, he lost a fixed hand of cards, and I became the property of Gangraes the not very Good. He was a big man, and I really struggled when I had to carry him on long journeys. He was quite a good owner in that he fed me and brushed me, and even learnt a few of the commands I respond to, but he was more into robbery and thuggery really. Eventually I became one of the general horses of an army he joined. After a misunderstanding over a hay bag, I got a reputation for awkwardness, and my training as a warhorse was a trial after that. They used to call me "the wierd pale one" and because I had bitten the stable master that morning (for brushing my coat too hard and REALLY digging in), another mindless thug whipped me. I had had enough and after a perfectly plotted escape found myself a free horse for the first time.

I wandered around for a few weeks enjoying myself but the novelty was wearing a bit thin to be honest. I think I had been around humans too long. One day a strange woman came near while I was grazing, she looked a bit battered and beaten but there was something in her eyes that I liked. She was tall, dark and kind of mean looking. But I knew she would be a good human and thought I might keep her around for a while. What a good day that was. I think she understands me better than any other human- even if she does think I am moody. Apart from the gender issue, we quickly built up a good understanding and the rest is, as they say, history! 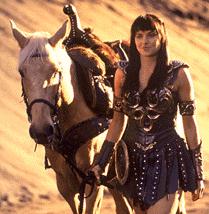 Links to ALL these other pages will be up soon

(Updates to TV Argo Page, and a few newish photos)

Argo's Photo Album / My Greatest Adventures / My Companions / The TV Argo-(real life!) / Argo Links / Where was I?

Back to my Xena Page

Thanks for trotting by!