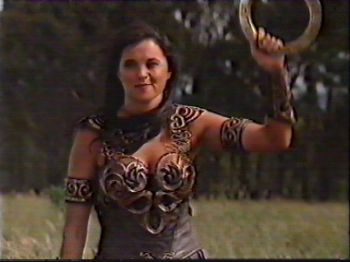 Having just got a TV card I finally got round to getting some screen grabs of a TV appearance by Lucy Lawless I didn't see mentioned on the web much at the time. It was a brief appearance, which had Lucy appearing to introduce a few clips of comedy highlights from Channel 5 - the channel which airs the show here in the UK. For non-Brits, Channel 5 is a very new channel - its only been going a couple of years and doesn't have that great a reputation at the moment. Xena and Hercules are two of its biggest hits. It also is only available to about 75% of the country.

Anyway, Lucy appeared in full Xena costume and did her Xena accent- probably so as not to confuse UK tv audiences who don't know she is a New Zealander. The awards show was on one of the main channels, ITV, and the programme was a fairly major tv event. It appeared to be a live link up, but I imagine it was probably taped. Lucy was funny and very natural. 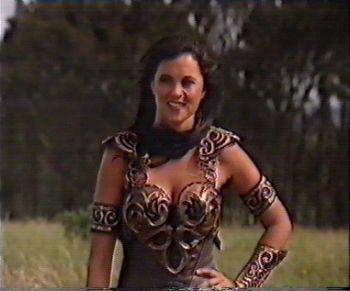 Lucy Lawless: Hi, I'm Xena, Warrior Princess. I'm Channel 5's hottest property. (Cheering and clapping etc.) I don't know why you are laughing at that but I just want to say thanks for the invitation and I'd like to have been there but dressed to excess is not really my thing, and besides, I hear that the comedy awards have a large lesbian following and I don't want to become type cast. So have a great evening. I got to say, it's a little cold and lonely here on Channel 5 but you know, if I hold this up (holds up her chakram), I can get great reception.(More laughter)

Back to My UK Xena Page