Alright answer time. Please don't get annoyed at me if you disagree, like I said my decision was final.
Correct answers are in bold type.

Q1. In which episode did Gabrielle lose her blood innocence?
Gabrielle:Murderer Princess
The Deliverer
Hooves and Harlots
Gabrielle's Hope


Q3. Which character has Xena NOT had sex with?
Hercules
Borias
Autolycus
Iolaus

Q6. In which episode did Gabrielle throw Xena's chakram?
Sins of the Past
The Greater Good
A Day in the Life
The Quest
The Titans
(In Greater Good it was a wooden copy.)

Q7. What did Xena use to kill the Green Dragon?
fire breathing skills
Lao Ma's powers
her chakram
pressure points
a hair pin


Q8. Which of Xena's lookalikes is a virgin?
None of them
Diana
Meg
Leah
All of them

Q9. In which episode did Xena and Gabrielle NOT kiss one another?
The Greater Good
Is there a Doctor in the House?
The Quest
The Debt
Return of Callisto
(We never saw them actually kiss in The Quest, whereas there was lip to head contact in Greater Good, ITADITH and The Debt, and a cheek to cheek kiss in Return of Callisto.)

Q10. Who or what is Kaltaka?
The Chinese God or War
An old friend of Xena's
Gabrielle's pony when she was a girl
water
the Greek name for Argo's tack

Q12. In which episode did we first meet Autolycus? ROYAL COUPLE OF THIEVES

Q13. What was notable about the episode Ten Little Warlords? LUCY LAWLESS DIDN'T ACT IN IT(I need the No Lucy answer, although there were others possible. At the end is her body double and the other bits of film were from old bits of footage.)

Q15. In Hooves and Harlots, who hit Gabrielle on the head with a staff? SHE DID HERSELF

Q16. He's played Marat, Darkon and Theodorus who is he? DAVIND TE RARE

Q17. In which episode did Joxer speak pig Latin? BEEN THERE, DONE THAT

Q19. Who gave Gabrielle the Amazon right of caste? TERREIS

Q20. What vanished in Vanishing Act? THE STATUE OF PAX

Q21. In which episode did we hear about Tyrella? IF THE SHOE FITS

Q22. Who beat up Xena and knocked out one of her back teeth? NAJARA

Q24. In which episode did Gabrielle get her hair cut? BETWEEN THE LINES

Q25. Which episode had sub-headings? A DAY IN THE LIFE

Name the character and the actor in each picture for 2 points, and an extra point if you can name the episode the picture is from.
character, actor and episode - some people didn't read the question!!! 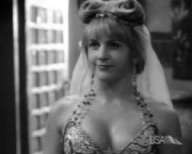 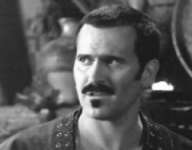 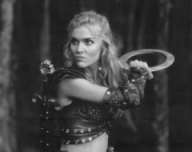 Harry (or Xena), Ted Raimi, Deja Vu All Over Again

Tie Breaker: List the episodes that feature FRUIT in some way. (HINT, there are lots!)
There are indeed, and I am not going to list them all, but for starters;

The Furies- the rotten fruit
Vanishing Act - on the table at the feast
Warrior...Princess - Xena as Diana eats fruit, also at the end
Fallen Angel - devil fruit for Gabrielle
Altared States - mother packs fruit in Icus' packed lunch at the beginning.
Blind Faith - Gab was offered grapes as bride of the king
Been There, Done That - fruit on the table when Xena goes visiting the midwife and healer
Warrior..Priestess..Tramp - the summer squash
In Sickness and In hell - Argo's apples
Takes one to Know One - bruised pears on Ravenica's bag
Beware Greeks Bearing Gifts - Gab eats an apple at the start
Mortal Beloved - Ares tempts Xena with some fruit and also where the villagers are attacked.
Royal Couple of Thieves - used as a weapon by Autolycus posing as Sinteres. Also grapefruit squashed in his face by Xena.
The Prodigal - Gab packs an orange in her bag when she leaves Xena at the beginning. I think the villagers throw it as a weapon.
Remember Nothing - There was lots of fruit at the inn and in the shop.
The Giant Killer - fruit on Dagon's table.
Ten Little Warlords - One of the warlords eats an apple after he has killed one of his rivals.
For Him the Bell Tolls - Joxer and Illeandra eating apples
The Execution - Gab brings some to Meleager
A Comedy of Eros - best use probably! Memorable banana also cherries.
The Quill is Mightier - the purchaser of the kinsman's sword is eating a fruit kebab.
Animal Attraction - more apples for horses
Girls Just Wanna Have Fun - Gab is cutting what looks like an apple by the fire.
Gabrielle's Hope - Cherries featured in Gabrielle's list of wierd food near the start.


Once you start looking out for fruit in Xena episodes you will find it very addictive. Let me know if you can spot more fruit episodes.(Thanks Sarah for helping me spot those.)

Hope you enjoyed the quiz. No moaning if you didn't win please!

Back to the Main Page