In Episode 9 of the new Renaissance series Hercules:The Legendary Journeys, appeared a character that had an immediate impact. She was Xena, a mighty princess forged in the heat of battle...oh sorry. Yes, Xena it was and this appearance was followed by another two episodes, numbers 12 and 13, the last two of Hercules first series. Lucy Lawless had appeared in episode 6, As Darkness Falls as Lyla. She must surely be the only woman to snog Kevin Sorbo twice in the first series as two different characters. Anyway, here is a look at those episodes.

This episode saw the first appearance of the character Xena. It is very interesting for fans to compare this Xena with the character seen in the series Xena:Warrior Princess. Here, Xena is a nasty warlord who is out to kill Hercules for the prestige it will give her. She does this by making Hercules' friend Iolaus fall in love with her. She makes Iolaus believe that she is fighting a just war against warlords attacking her village, and that Hercules is not his friend. There is,

inevitably, a confrontation between Iolaus and Hercules, and Iolaus realizes that Hercules could never be his enemy. Xena escapes and rides away.

The character of Xena will be unrecognizable to fans of her show. For a start off she looks and sounds a lot different. It ia well known that there were a number of other actresses that were lined up to play Xena who dropped out. Lucy Lawless had been seen just a few episodes before as Lyla the centaur's girlfriend. Here, Xena is much sexier, and more conniving. The Xena we get to know in her own series later always gives the impression that she was a soldier rather than this Mata Hari type character we see here. Obviously, the producers changed their ideas a bit about the portrayal. Lucy Lawless plays Xena as quite girlish, with a mich higher pitched voice than the later Xena. We see her in a range of outfits and dresses that Xena of X:WP wouldn't be caught dead in. I did like Xena's opening scene where she attacks her own army, in an apparent training exercise. A later fight scene is another highlight, but this Xena can't Yiyiyiyi, or somersault, although we do see the chakram in action. I was very disappointed with Xena's army. If she is such a conqueror, how come they are such a bunch of wimps! When she comes back to the camp at one point, we hear the soldiers say, "Where have you been? We were worried?!" The two soldiers that we do meet in more detail are also pretty useless. One tries to kill Hercules and immediately betrays Xena, the other surrenders in a fight with Hercules very very quickly. It makes it hard to believe in her ruthlessness when her army are such wusses.

Despite this, and the highly unconvincing storyline of Iolaus turning on Hercules, it is easy to see why Xena returned so quickly. Lucy Lawless does an excellent job of making her a truly memorable character. And that black armour with the claw-like epaulets is gorgeous!

This second episode in the Hercules series is the best, in my opinion. As a fan of Xena:Warrior Princess, the character of Xena is much more like the Xena we know and love. Gone is the flirtatious conniving back stabber of 'Warrior Princess'. Here we see Xena the soldier. The story opens with Xena's army laying siege to a town. Xena gives them a chance to surrender while her leuitenant Darphus is the one who wants to kill them all. Xena is shown to have honour. After the attack, Salmoneus turns up, and while taken prisoner by Xena,

acts as a sort of clown and amuses and chats to her. At the next village, Xena leaves her army to go scouting. She instructs them not to attack it, but Darphus takes matters into his own hands, killing all the men, women and children. Xena is angry, and on finding a baby that Darphus has missed, saves it from the slaughter. Darphus organizes a rebellion and Xena is overthrown. She must go through the Gauntlet to leave. This involves all of the warriors making two lines that Xena must walk through. They attack her as she goes, but thanks to her fighting skill and strength she makes it to the other end-just. Meanwhile, Hercules is on Xena's trail and meets up with one of the men from the village that Darphus massacred. He also wants Xena dead now. However, when they meet up with Salmoneus, he tells them about Darphus and how Xena isn't all bad. As he speaks though, Xena arrives to fight Hercules. She thinks that she might be able to get her army back if she can kill him. After a good fight though, Hercules has her at knife point but spares her and tries to get her to fight with them against Darphus. She refuses. Hercules and his friends go on and eventually fight a battle with Darphus and his army. As they fight, Xena arrives to help. She kills Darphus. The episode ends with her and Hercules agreeing to look for adventure together.

This episode is satisfying to the Xena fan for a number of reasons. Firstly, a much more believable Xena. She has values and honour, but is still a fierce warrior. Her army is much more convincing as a conquering force, and Darphus a truly nasty one. Her exchanges with Salmoneus show her to be human and with the dry sense of humour we know. The gauntlet of blows that she must go through is believably vicious-just about, and seeing Xena come through it gives us a look at her strength, while her mercy towards the baby she rescues show us her compassion. It is a dark story, and Xena thankfully remains a dark character. Even with her human side on view, she still rejects help when she is injured and strides away from Hercules after losing to him in a fight. The decision to stay with Hercules at the end is stretching believability a bit, but Xena still needs to be reformed a bit more. Throughout most of this episode, Xena wears that nice black outfit with the claws, but after her ousting from her army somehow comes up with a very fetching gold ensemble! The hair ,voice and carriage are definitely Xena now. Lucy Lawless sticks with this portrayal for the future. Here we get the Xena battlecry, more chakram tricks and the acrobatics. A very satisfying proto-Xena.

Xena's final appearance before getting her own series was not quite as good as The Gauntlet. Here, Ares the god of war, raises Darphus from the dead and gives him his pet monster to defeat Hercules. Xena, Hercules and Salmoneus set off to face Darphus. Along the way they meet up with Iolaus, who cannot believe that Hercules is giving Xena a chance. 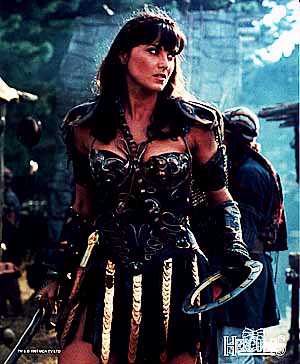 After a number of hair raising adventures, and a romantic interlude for Xena and Hercules they arrive at Darphus' camp and must defeat him and the monster. Xena then tells Hercules she must go on her own to try and put right the things she has done wrong.

The potential conflict between Xena and Iolaus never quite happens in this story, and the romance between Xena and Hercules is not very convincing. Also a rather weak story means that this is a bit of a disappointing conclusion to the Xena trilogy. Xena's future as a warrior for justice IS quite well handled though. Lucy Lawless is excellent-as always- at showing Xena's doubts. There is a revealing campfire conversation when she tells Hercules that there is nothing that makes her burn for justice the way Hera's murder of his family does for Hercules. Hercules' comments about doing one good thing are greeted with an understandable toss of the head from Xena.

Think about it, what did Hercules actually do for Xena? Not kill her after beating her in battle, help kill a mutinous soldier and not hate her. Is that really enough to turn that harpy from 'Warrior Princess' into the wonderful hero we see each week in Xena:Warrior Princess? Watching these episodes again, it is clear that Xena is different from the beginning of 'The Gauntlet'. Already she is showing mercy and humanity. Obviously, some change came over her between the first and second appearance because there was pure evil in the Xena of 'Warrior Princess'. Now clearly, Hercules is supposed to be her redeemer-the love of a good man and all that, but there is a change in the character after that first episode. Whatever causes Xena to change, the stage is set after 'Unchained Heart', and Xena rides off ready to branch out on her own.

Back to reviews index
Back to the Main Page