A Friend in Need DVD review 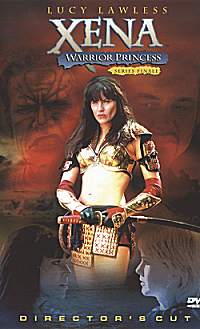 After years of waiting, hoping and refreshing release lists, episodes of "Xena: Warrior Princess" are finally making their way to DVD. Not with the speed or high-quality and profile of "real" TV shows like "the X-Files" or "Buffy" (ha!) - but things are slowly gathering momentum. The PAL DVDs are picking up in terms of both quality and release dates, and now the first ever Region 1 Xena DVD has arrived in the form of the 'director's cut' edit of controversial two-part series finale A Friend in Need

With its scope, grandeur and film-like atmosphere, A Friend in Need was the perfect choice for a DVD release. Although I'm still looking forward to such aesthetic marvels as "Adventures in the Sin Trade", "The Debt" and "The Bitter Suite" to be released digitally, none of them can hope to hold a katana to A Friend in Need.

Upon loading the disk the viewer is greeted with a cheap-looking (and very orange) menu - with the choice to either play the episode, select a scene or access the bonus features. The between-menu transitions involve the current screen being shattered by a Chakram to reveal the new menu underneath. How exciting.

After a little "A Renaissance Pictures Production" title the credits roll - the Season 6 credits look good (the first time the 'new' title sequence has appeared on a DVD) - though a little grainy in places. This version of A Friend in Need is the one with the single title sequence that plays before any of the episode has shown, and has both episodes joined flawlessly together, for that movie-like feel. 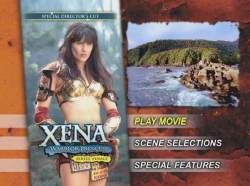 Once the credits end we join Xena and Gabrielle star-gazing - there's little point reviewing the episode content itself, that's not what I'm here for, so on the non-story side the first thing you'll notice is, disappointingly the fact the DVD is presented in fullscreen (4:3) ratio, as opposed to the widescreen that the show has supposedly been shot in since the third season. A pity, as A Friend in Need has easily the most gorgeous cinematography of the whole season and would doubtless benefit from the additional visual freedom allowed by the widescreen format. It's hardly the end of the world - especially when all other aspects (haha) of the visuals are so utterly, breathtakingly gorgeous.

The detail level is excellent. Whereas the Season 1 DVDs were only a small step up from VHS, I'm happy to say the image quality here is superb. I realise that there's a big difference between what S1 and S6 looked like anyway, but it could well have been a lazy transfer. Luckily it wasn't - and there are some truly fantastic quality images to revel in. The glinting edge of the katana when Kenji first hands it to Xena, the sparks in fight in the foundry, the raging fire in Higuchi, Xena's last mortal fight, Gabrielle stalking across the stepping stones by the waterfall ... practically every scene was gorgeous to being with, and now they're all so incredibly sharp and colourful, there's no pixellisation (as DVDs sometimes have) nor any 'colour bleeding'. What also surprised me was the increase in detail didn't show up the special effects as looking excessively fake. OK there are a couple of blue-screen shots that look a bit off, but the CG effects and locations hold up remarkably well. 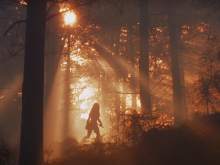 The audio is similarly magnificent. There are two audio tracks on the disk - the commentary and the episode (I keep trying to type "film") itself - presented in Dolby Digital 2.0. Again it would have been even better in 5.1 audio, but what can you do? What we do have is a whole hundred minutes of fabulous music. I always loved the way so much of the FIN soundtrack was brand new and so incredibly emotive and dramatic - it gave it that extra special feel. The sound to is in extremely high quality - something I personally appreciate all the more after years of second-generation mono videotapes. I feel it just gives everything a more three-dimensional appeal; it's more involving for the viewer to wince with the thud of every arrow hitting home and every clash of swords. The superior picture and sound quality of the DVD actually improved the episode even further for me, as every little sound effect, bar of music and wonderfully incongruous twang of Morimoto's accent is crisp and clear and loud; it just adds to the absorbing effect. The same goes for the visuals - in terms of look, sets, costuming and direction AFIN is a work of art - and to see every detail on the costumes and locations is a real treat. I think only a handful of episodes could stand up to this level of detail without being shown up as fake and cheap-looking, so it's good news for all involved that it works as well as it does.

I even found Yodoshi a better villain this time round, as his voice has a more menacing timbre and you can see all the little details on his armour and the cracks in his makeup making him seem just all round a little more menacing. Technology hasn't advanced enough to make him a better actor though.

Aside from the incredible (oh, my superlative bank is running dry already) picture and sound quality - another big draw for me was the fact the DVD is the director's cut - total runtime 100 minutes compared with the 85 or whatever the TV version was. Not living in the US and being too cheap and lazy to arrange someone to send it to me I'd never seen it before and was really looking forward to it.

It didn't really make a whole world of difference in the end - there are only two real whole "new" scenes, the rest is reinserted footage ranging from things that add motive and depth to the characters, to things that just look cool - but it was still nice to have. I've always felt that the epic/Rob Tapert-written/directed episodes have a lot more resonance than the usual episodes, things happen because of vast, far-reaching reasons and always have such important meanings and repercussions, to re-use something I just said they feel more 'three-dimensional' - and the additional footage just further fleshes this out and has the added bonus of making things more dramatic and atmospheric where need be. 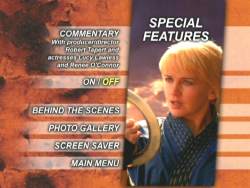 Of the additions, I found the 'bird' scene to be superfluous and Akemi's 'explanation' towards the end gave the proceedings a bit more logical structure (nooo!) Other than that, I loved the additions to Xena's fight with the Samurai army - the way she broke the swords, stuck them into the ground, then kicked them into people was a great touch, and I absolutely ADORED the full-length version of Gabrielle's first fight with Morimoto - the added footage just made it so tense, made it look so fabulous and made the ending of the scene work so much better.

As for the much-discussed change to the ending, I'm indifferent really - removing the shot of Gabrielle alone at the very end doesn't change anything so I can't really see the point, besides, the idea that it was changed to appease "the fans" is a horrible one. In all I'm certainly glad the director's cut was chosen, and there's no way I'd go back to the regular edition for anything.

The other thing I was really looking forward to on this disk was hearing the audio commentary with Lucy, Reneé and Rob. Ever since DVDs with this feature first came out I've waited diligently for the day when an episode of "Xena" was produced with a commentary. Does it disappoint? Well, to tell the truth, it did, a little. Not to say I didn't enjoy most of it and would happily buy others on the strength of these discussions - but it just didn't quite gel. There were long periods of silence, lots of comments made that weren't followed up on, things brought up that I was really interested to hear about that were cut off in favour of something else and Rob contributed surprisingly little. I understand things like this aren't scripted but I think maybe a little more editing was required. Of course there was still plenty of great content after the slightly stilted start (and it's understandable seeing as out of the three, only Rob has ever done one of these before) and once everyone had warmed up a little there were some funny exchanges and plenty of interesting discourse on things that happened behind the scenes, things that should have happened but didn't and of course which parts of the episode were rip-offs - sorry, homages.

Next up on the sliding scale of good content is the 30-minute "behind the scenes" documentary - the same one that came with the Creation Fan Kit no less. If you didn't want to mortgage your house to be able to afford the kit then this must come as partial relief, and hell I'm happy enough to have it there - it's interesting, it's funny in places and you get to see the Lord Rob at work. Watching it I was surprised at how little of the onscreen action was actually scripted (I can't believe they hadn't worked out how Yodoshi was going to be defeated yet) and it's always a pleasure to see Lucy and Reneé out of character. 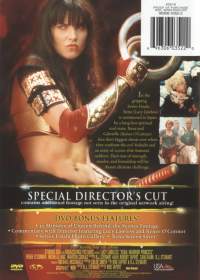 The only minor annoyances I felt regarding the documentary were the fact we never got to see the 'final' versions of the scenes; after seeing how they were made up it would have been nice to see how they turned out in comparison, and also the way some of Sharon Delaney's comments are a bit uh, pointless and patronising. I mean, don't get me wrong she does a fine job most of the time and the effort she puts in for stuff like this is nothing but admirable. It's just every so often there's a bit like:

Sharon: "watch how Lucy says 'good shot' to the snowball thrower in this scene" Lucy: "good shot" Me: >:|

The rest of the extras on the disk are pretty poor. The screensaver is dreadful, just a still, badly-drawn background with FOUR WHOLE images from the episode cycling over and over again in the middle. The "art gallery" is little better than the ones on the R2 Universal DVD releases and serves almost zero purpose as far as I can tell, but these are just little extras chucked on the disk for the hell of it. The real treasures are the episode itself, the commentary and the documentary - and believe me they're worth every penny.

I have to say I absolutely love A Friend in Need - I really could not have hoped for a better series finale, and this is easily the best way possible to watch it. Sure if you nitpick there are a couple of tiny irritants on the DVD, a couple of things that could have been better, a couple of things that look a little cheap and hurried - but the overall quality of the presentation, combined with the quality of the finale itself means as far as I'm concerned this is as much an essential purchase for the average person as food or water, and should be bought as soon as possible even if you don't have a DVD player.

Back to Main Page