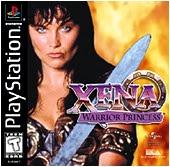 I made a very silly comment here, on the message board of this very site while talking about this game. I said it was really only for obsessed fans. Which, of course, is stupid. If you're reading this , you *are* an obsessed fan, and so are hundreds of thousands like you.

Needless to say, you probably made up your mind up about whether to buy this or not the second you heard the words "Xena" and "Playstation game" in the same sentence. I know I did. To hell with the reviews - what would they know? This is XWP we're talking about here!

My point is, you know you're going to buy this, and I know you will too. You may already have it. I'm really just here to soften the eventual blow, because, basically, this game isn't very good. It's not dreadful, by any means, and there are some bits that made me go "ooh, that's clever" - but if you removed all the licensing - it would be another sub-par Tomb Raider game.

Let's get a very bad point out of the way first. I really disliked the game engine. It's clunky, clumsy and prone to slowing down when more than 3 characters occupy the screen. The controls are unresponsive, and the camera is terrible! There are few things more annoying than falling off a cliff because the %*&$£$! camera wouldn't turn quickly enough. You can rotate the view using the back shoulder buttons...but only SOMETIMES! What the hell is that about? Several events in the game require you to knock things off cliffs or dodge out of the way - but if you can't see the precipice behind you, then you're reduced to blind (and frustrating) guesswork.
Surely a little more playtesting would've helped? It's not exactly a hard-to-find problem...

What else? Oh yes, the combat system. "Xena possesses an awesome array of combat maneuvers [sic]!" shrieks the manual. Well, she does. but it seems a bit pointless using most of them. Your controls are Sword, Kick, Jump, and Block on the front of the pad, and L1 on the top being run, and R1 being your "look" mode. It's all very well having tonnes of moves, but if the controls are too slow to register them, and the enemy attacks too quickly - it's a waste of time. I'm sure the "groin kick" is very fun, but in the time it takes to execute, you've just swallowed a sword. Not good. Another problem that occurs later in the game - the enemies get harder, but it's an "unfair" sort of harder. They take more hits to kill, fair enough, but they also tend to outprioritise you too easily. You do a kick, they do a slash; they win. I was reduced to using and abusing one move (the roll) way too often later in the game, and it worked.

On a personal note, I found it almost strange to see Xena getting beaten up by pirates and other assorted goons. I'm used to her being almost invincible - I suppose this becomes less of a problem the better you get.

Naturally, you get some Chakram action too. Going into view mode and then pressing "sword" will throw the circular...uh...thing of death. They got the noise wrong! I can't believe it! Where's the screeching, air-cutting noise we've heard and loved over the last 4 years? It makes a pathetic SWSSSSSHHHHH instead. Boo. I had to make do with doing it myself.

Another Chaky criticism I have is the throwing system. You chuck it, and then you steer it in mid-air. Eh? I was looking forward to beating Xena's "Been There, Done That" rebound record, but the system only allows one rebound. Surely a better way would have been to dump the mid-air steering (how can you do that anyway, telekinesis?) and allowed multiple rebounds. That would allow for some truly skilful shots, and would certainly be more...ahem...realistic.

I suppose I'll grudgingly admit the steerable Chakram is a useful scouting tool (the Chakram-cam you get allows you to investigate distant areas without any physical danger.) and it looks quite good too. (Mumble mumble)

You also get some magic spells! Located in barrels, pots, behind trees and all sorts of irritating hiding places are little icons, which, when collected give you a magical power. these range from a flaming sword, lightning bolts, ice magic, to a homing Chakram and invincibility. OK, it's not exactly accurate, but wiping out that smug archer with a homing Chakram is pretty funny.

It seems the programmers have seen "Between The Lines", for as well as your on-screen health meter, you also possess a karma meter. Despatching foes with non-lethal attacks (kicks etc.) increases your karma, and when it reaches maximum, Xena glows with a yellow aura, and does more damage when she attacks. I guess she also gets to be reincarnated as an old Indian woman, but I didn't see that in the game. Maybe in the sequel? :)

The enemies are a mix of familiar and unfamiliar. Stupid thugs and pirates blunder along, shouting "There she is! Get her!!!" which is a nice touch. There are also Dryads on a lot of stages, and a few levels take place in a "renegade Amazon" village, which is ruled by a Velasca-look-a-like, but otherwise they're pretty much made up. Zombies, ninjas, giant spiders and so on. The end-of-level bosses are suprisingly good - with some interesting ways of killing them, most of which are actually non-frustrating. Hah, another good point! There's a lot of Greek mythology influences, far more than the TV show. You fight the three Gorgon sisters, cross the Styx, go to Tarturus (it's a level, I'm not insulting you :) etc. etc. 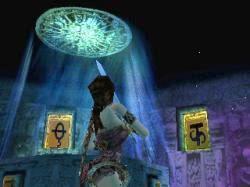 
I suppose this is one of my main criticisms. The "feel" of the TV show just isn't there. The story is a lame "evil sorceress kidnaps Gabrielle" one, and I had to shake my head in wonder at some of the appalling pre-level descriptions.

I suppose it's a common misconception that XWP is a load of "chop-socky crap" (thanks Marco) aimed at hormonally-imbalanced teenage boys. And so the train of thought dictates that this sort of person wants "kewl fighting, badass monsters" and a demented camera that consistently gives a view of Xena's backside. So that's what was made. It's not entirely the fault of the game's designers - what choice did they really have?

I personally would have liked to see an adventure game with combat sequences, sort of like "Curse of Monkey Island." This would have been more story-driven, more interesting and, given the right people, closer to the programme we know and love.

And what of Gabrielle? She makes a showing in the intro, where she and Xena are walking along, before Xena runs off to see an old friend. She gets kidnapped. You rescue her. Ah, a good bit. The three levels where Gabrielle fights alongside you are definitely the highlight of the game. As you invade the Amazon village, Gab covers your back, whacking enemies and making sarky "this is fun, isn't it?" comments. Ahh. Bliss. Being a Class A Gabrielle worshipper, the concept of having her as *my* sidekick for this short time was a wonderful experience. I spent ages just looking at her running around, watching her fight, pushing her about and...er...seeing if I could hit her with my sword.
Sadly, she gets kidnapped again [sigh] and you don't meet up until the very end, where, upon rescuing her, Xena and Gabrielle have a very subtexty hug. Aw. It was almost worthwhile... I said almost. 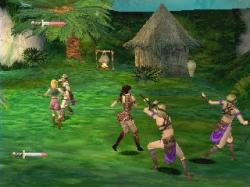 (See the little figure on the left? Our Gabby that is)


So, not enough Gabrielle. A Bad Thing.

I suppose at this point I should mention the voice acting. Oh dear. I had originally read that the real people were to do the voices, but it turns out that for whatever reasons (common sense?) this was not to be. The woman who voices Xena, just doesn't have it. She lacks the implied menace and gravitas that Lucy brings to the role, sounding more like an annoyed secretary than a Warrior Princess. Gabrielle's voice was a little too whiny and "little girl-y" to be right. Special mention goes to Ares' voice-over. I really think Kevin Smith should consider suing - as the Ares v/o is tragic - the guy sounds more like an insurance salesman than the God Of War. It always brought a smile to my face hearing his speech towards the end of the game.

Scattered throughout the game are little cinema sequences, triggered by certain events. These are strange, as they look like they're part CGI, part in-game graphics. The final look is nothing special.

That's pretty much the blanket description of the graphics throughout the entire game. They have a washed out, blocky look to them. You can never see too far into the distance (limits of the 3D engine, you know) and the scenery frequently breaks up and flickers. It's partly due the to limitations of the Playstation, (Where's the Dreamcast version?!?!) and partly lack of programming skills.

The sound is equally drab. Apart from the voices, which I've already discussed, the sound effects are average, and the music is, sadly, completely forgettable "Ye Olden Days" blancmange. Only on the credits screen do you get to hear any of Joe LoDuca's stuff (the title music) How frustrating.

The game also supports the Playstations' Dual Shock controller - which vibrates whenever there's an explosion, or heavy footfalls or whatever. Ooh.
To extend the challenge, each level has two scrolls hidden on it. You are supposed to collect all of them. I missed about 10 in the end. And I don't really feel like looking for them. Once you finish a level, you can save it, and from then on can access it any time you want.

The whole thing feels like a cash-in to me. The back of the manual tells you to "WATCH XENA ON USA NETWORK AT 6PM" (remember this is the US version) - in the box is a miniature Creation Entertainment catalogue, along with a bit of paper telling you to join the fan club. It's a bit much. I know XWP is a big thing in the States, but I'd rather not have it jammed down my throat quite so much.

But what the hell. You've probably pre-ordered it anyway. I suppose the novelty of actually *controlling* Xena, and teaming up with Gabrielle makes it an interesting purchase. The unintentional humour derived from the bad voices is a plus, the boss fights are good fun.

It's worth wasting a boring Sunday afternoon on, but I don't think much more than that. Buy it if you must. But don't say I didn't warn you.... 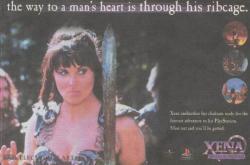 UK newspaper advert for the game