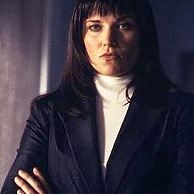 3rd April 2003 - Lucy in Ireland!
The Ireland on Sunday newspaper carried this story recently on our favourite Warrior Princess in the Emerald Isle! SOMEONE better track her down!!

Lucy Lawless stars in the adventures of the formidable statuesque leather clad fighter, Xena Warrior Princess amassing a massive cult following throughout the world as she battles barbarians, oppressors and demigods.

But now the Xena Warrior Princess' actress is coming to Clew Bay and Clare Island to get face to face with the myth of a real warrior woman; 16th Century pirate sea queen Grainne Mhaol.

The adventures of the 16th Century pirate queen of the seas are to feature in a special Discovery Networks Europe series exploring history's most fearless female warriors.

Lawless has a strong connection to the area where the real life warrior woman, Grainne Mhaol controlled. Her family, the Ryans originially from Quilty in Co. Clare ended up in her native New Zealand when her great grandfather had a 'scuffle with the police and was sent down under for

punishment' The Warrior Woman who is anxious about leaving her three children from 14 years down to 10 months for 3 weeks, 'turned down many lucrative but dissatisfying offers from US TV to do make this fascinating series.

I just can't wait to get to Ireland and to start filming, running around the Irish countryside with a film crew will be just fantastic' she said.

Grainne Mhaol - mhaol meaning cropped hair - was known to have chopped her long hair off to survive in the mainly male dominated world of pirate infested seas, controlling Clew bay with an iron fist from her castle on Clare Island

Grainne who was known as Grace O'Malley by the English was married with 3 children before she began her famous career on the high seas, marshalling 3 pirate ships and up to 200 men as she opposed the English attempts to remove her from her kingdom.

'The facts are thin on the ground about how exactly Grace become this amazing and feared warrior, she was a women who had no English but decided she wanted to meet Queen of Elizabeth so that's what she did, she sailed up The Thames river in London and demanded an audience with the Queen, something that was completely unheard of.

Grace had no English but excellent Latin forcing Queen Elizabeth to talk to her in a foreign tongue.

After Grainne's first husband was been executed by Queen Elizabeth's troops she remarried in 1556 Iron Richard Burke and had a son named Tibbot. She was captured by the crown's forces and jailed for 2 years returning to her castle on Clare Island to continue her defiance.

In 1558 Elizabeth I pardoned her in an attempt to bring peace to the region but his attempt failed as the local English administrators continued to go after the woman who had been a thorn in their side for years.

'She was a woman who paid a heavy price for her strong beliefs and has to some extend been written out of history' Lucy Lawless told Ireland on Sunday.

Fighting was her only means of survival and this she did until the Irish defeat at the Battle of Kinsale in 1601 ended her dominance. She died in 1603 and has since been, to a large degree, overlooked as a genuine heroine of Irish history.

Her career spanned from the supremacy to the suppression of Gaelic rule. Folklore conveys her alliances with English forces, her imprisonment in the goals of Limerick and Dublin, and her partial submission to Elizabeth Ist, Queen of England. Her actions were brave attempts to uphold her government over her fast retreating Gaelic kingdoms.

The series entitled 'Warrior Women' presented by Xena Warrior Princess, Lucy Lawless will also feature other fierce women including Joan of Arc, Boudica, Queen of the Iceni Tribe, Chinese heroine Hua Mulan and Apache warrior Lozen and will be broadcast later this autumn on the Discovery Channel.