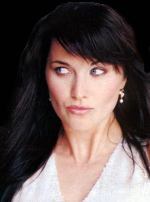 I am a huge fan of Lucy`s - I wrote an editorial a few months back about why I think Lucy is the greatest thing since sliced bread which You might like to read here (go on, its not bad...)

It must have been quite a worry for the bosses back in 1995 whether this unknown and inexperienced actress would be able to carry the new show. Lucy had impressed Rob Tapert and the producers with her relatively small role in "Hercules and the Amazon Women" and had appeared on HERCULES - the series - too, but even so, there was always going to be a huge burden on her. The show was always likely to stand or fall based on how successful Lucy was at portraying the Warrior Princess. The start of XENA coincided with a time of personal turmoil for Lucy (her first marriage was breaking up), but from the beginning Lucy was a stand out. A female action hero was unusual enough, but finally we had an actress who didn`t look like she had stepped right off the pages of some fashion magazine. Lucy managed the almost impossible task of looking gorgeous, yet also looking convincing as a warrior. When she swung her sword or threw a punch, it actually looked like she could do some damage!

Of course the wonderful stunt team and fight choreographers made those fights, but Lucy was believably tough and managed to make Xena a gal with attitude...no posing as some simpering secretary like Wonder Woman did, Xena was unapologetic, and liked a good fight. Of course Lucy had the physical attributes - her height (5'10 1/2) certainly helped, plus the fact that while she is actually very slim, Lucy looks quite, erm, well-built onscreen! Maybe that`s why we have seen much more of her body in Season 6 - she wants to prove that she is really very svelte! 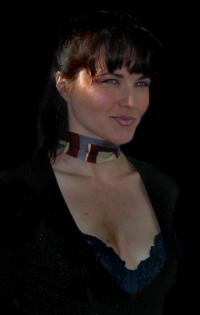 So, while looking perfect in the role, the next thing was how would Lucy shape up as a lead actress. Well, maybe I am biased, but even in those first 24 episodes, Lucy demonstrated her range wonderfully. Establishing her Xena persona took a few episodes - it is interesting to hear her voice especially - quite a bit higher pitched in those early days. However we got a chance to see her emotional range as early as the very first episode, Sins of the Past a great opening episode, where Lucy got to have a few decent fights, meet up with Gabrielle and make peace with her mother. Then in WarriorPrincess it was Lucy`s comedic skills that got an airing. Xena`s look-alike Diana was a fabulously funny turn from Lucy. Later, there would be two more lookalikes, Meg and Leah, for Lucy to have fun playing. The final episode of the first season, Is There a Doctor in the House was one Lucy admitted was not easy - that resuscitation scene was the most emotional and demonstrative we had ever seen the usually stoical Xena.

As the series continued, I think Lucy just got better and better. My list of notable Lucy performances could go on and on an on! So, I am going to try and categorise a bit...

The Dramas  Those people who dont watch the show properly would be surprised just how complex the role of Xena actually is. Time and again, Lucy Lawless has been called upon to show Xenas emotional journey, and she did it extremely well. That dramatically overt scene in Is There a Doctor in the House was not really the norm, often Lucy`s preformance was a more subtle than that. For instance, Xena walking away from Solan at the very end of Orphan of War, the wonderful scene from The Debt when Gabrielle tried to get Xena to promise not to kill Ming Tien, and Lucy doesnt say a word, yet conveys so much. Or how about Xenas descent into madness in The Furies. While some of that episode was played for laughs, there was a deeply serious side to it as well - a Xena we never had seen before, or since. For many of us, Lucys portrayal of evil Xena in the various flashback episodes was a highlight. The Debt, Adventures in the Sin Trade, Past Imperfect and The Ring Trilogy. To play the same character but in an earlier incarnation was quite a challenge. To get just the right amount of the Xena we know and love in there, yet showing an untempered ruthlessness, Lucys evil Xena smirk was immensely enjoyable. Then there are the tragic moments like the death of Solan  and Xenas awful howl. Her reactions to Gabrielles numerous deaths and injuries (!) in Is There a Doctor in the House, Sacrifice 2 and One Against an Army.

Of course, the way Lucy Lawless and Renee O`Connor acted together, showing a relationship that caught many people`s imagination is another factor again.

The Accents  I am reliably informed by American friends that Lucys US accent is pretty much perfect. But the number of different voices and accents she has used over the 6 years is huge! About the only one we havent heard is her own New Zealand accent! There has been Southern US (Mel Pappas in The Xena Scrolls), the different voices for Xena, Meg, Leah and Diana. Also Callisto as Xena in Intimate Stranger, Xena in disguise in King Con, Vanishing Act and as Miss Amphipolis. We had devil Xena in Fallen Angel, three fates in A Solstice Carol, amnesiac Xena in Chakram as well as a couple of HERCULES Xena incarnations  as the unforgettable Conqueror in Armageddon Now and the alternate gangsters moll Xena in Stranger in a Strange World. Then there is the singing!

Clearly Lucy Lawless has been lucky in that the role has given her scope to do so many things, but she has made it work. The iconic Xena is a truly memorable TV character and while Lucy will probably find it hard to break away from the role, she has been brilliant, and the main reason for the success of the show. There has been a lot more to her acting than those categories above, but I`ll save that for the book!(Prospective publishers can email me at the above email address..:) )

Thanks a thousand times, Lucy, youll always be a superhero to me.