XENAVILLE is a non-profit making site (ie..I do it for the love of it!) and indeed, have to pay for the web hosting and domain name. So how can you help? Well, if you're buying books or DVDs, I an have affiliate deal with Amazon UK so click over there and dust off that credit card...

Seasons 1 and 2 of XENA on DVD

Universal Playback is reissuing the first 2 seasons on 21st May 2007. No extras, but they are region 2 releases. Buy now! - Season 1 and Season 2 from Amazon

Buy The Complete XENA on DVD

UK Buyers, here is your chance to own the complete series on DVD. This is a Universal Playback region 2 release, which means zero in the way of extras, but a collectors item nevertheless. This set is available exclusively on the internet; each limited edition box set is individually numbered and features all 133 episodes! (And it even looks as if Universal Playback have the first season eps in the correct order!) 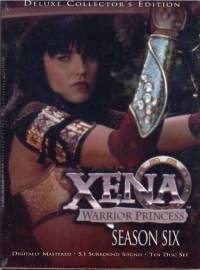 Not as many commentaries unfortunately, but an appealing set of extras that should have you getting your credit card out! Fan Favourites like When Fates Collide and the Ring trilogy are sure to be fun. Another view on A Friend in Need 2 from Rob Lucy and Renee should also be interesting. I've enjoyed the B Roll and alternate cuts on other sets, so am keen to see those too. 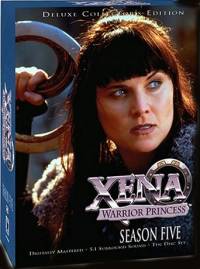 A good set, decent commentaries, but just not enough of them! Shame eps like Amphipolis Under Siege gets no feature on it at all. Would have been nice to hear from Rob Tapert more. He barely says anything on the Antony and Cleopatra commentary. The Behind the Scenes on the 100th ep is nice. Particularly as it lets us see the much missed Kevin Smith goofing around a bit. The Gabrielle costume test is very odd - Renee spending 10 minutes running around in her costume - and with long hair! A good opportunity to re-evaluate the much maligned season 5.

The next must-have Region 1 DVD set from Anchor Bay looks like being another good one. Sharon from listed these known extras:

NOTE: Ted Raimi and Bruce Campbell filmed a Q&A session on their own covering A Tale Of Two Muses, In Sickness And In Hell, Key To The Kingdom, Deja Vu All Over Again, If The Shoe Fits

Probably the best series of XENA and an excellent DVD release with tons of extras. Lucy and Renee get all emotional watching One Against An Army, and everyone enthuses over The Debt - although sadly only a commentary on part 1.
Go here to MaryDs site for details of what exactly is on the S3 DVD 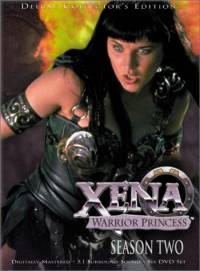 In terms of extras, S2 is ahead in that EVERY episode included a little featurette - a big plus point. 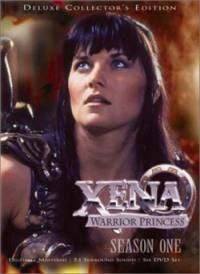 The main XENA shopping items around are the Anchor Bay Region 1 DVD releases. The first season is available right now, with the second season coming in September. The excitement around is for a few reasons. Firstly, the Region 2 releases had no extras at all. Secondly, US fans have not been able to see the series on DVD!

I always quite liked it, and if you are looking to buy, Season 4 of Hercules has some really fab episodes. Anchor Bay's releases are similar to the Xena releases, with plenty of extras... 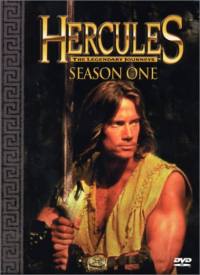 Also maybe worth a look, is the HERCULES season 1 DVD set. Not only do you get season 1 of Hercules - including The XENA trilogy, The Warrior Princess, The Gauntlet and Unchained Heart, but also included are the 5 HERCULES telemovies that started the whole thing off, and include Renee O'Connor co-starring in Hercules and the Lost Kingdom (my favourite of the Herc films), and Lucy Lawless in Hercules and the Amazon Women. There are commentaries from Kevin Sorbo and Michael Hurst too. Don't forget, Lucy Lawless also appeared in the episode As Darknes Falls as bad girl Lyla, yet another thing to look out for. All in all, a worthwhile buy. 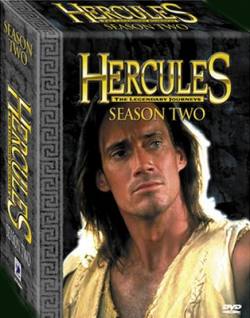 Season 2 of HERCULES is now available also. Season 2 saw a full season of 22 episodes (unlike the first season) and introduced such characters as Autolycus and Aphrodite. Lucy Lawless popped up again in The Outcast, reprising her role as Lyla (but not half as nasty and with a distressing fizzed hairdo!) Another standout was the introduction on Aphrodite in Kevin Sorbo's directorial debut, The Apple. Extra DVD Features:

Buy Hercules S2 DVD from Amazon.com Season 3 of Hercules included the first Xena crossover - and was part of a pretty decent story arc involving the Golden Hind who was also a woman called Serena who Hercules marries (as did Kevin Sorbo to actress Sam Jenkins incidentally.) Xena and Gabrielle appeared in the episode 'Judgement Day'. Ted Raimi as Joxer also popped up. One of my favourite eps was 'Love Takes a Holiday', with a delightful turn from Alex Tydings as Aphrodite. Danielle Cormack aka Ephiny appeared in the rather crap 'Les Contemptibles'. Also look out for Farscape's Claudia Black in 'Atlantis'.

The highlight of Hercules 4th season (and probably its best year) was the brilliant 'Stranger in a Strange World', and Armageddon Now 1&2 - episodes that actually stand up well against most XENA episodes. No coincidence then that they both are crossover episodes. SISW sees Iolaus enter and alternate universe where Hercules is evil, and Xena is his leading lady and just as bad! Look out for the hilarious cake fight between Xena and Aphrodite. Armageddon Now is Callisto's show! She goes back in time to kill Hercules mother, so Herc never existed. Iolaus must try and stop her. AN2 sees Lucy Lawless appear as 2 alternate Xenas - and Xena the Conqueror is a BIG favourite among Xena fans. Especially when she has outspoke slave Gabrielle crucified! This is an outstanding Callisto episode, and one of Pacific Renaissance's finest (two) hours. Season 4 really is a must buy also for 2 comedies. '..And Fancy Free' sees Michael Hurst play the Widow Twanky and teacher Herc to dance, while 'Yes Virginia, there is a Hercules' sees the cast play the production team of Pacific Renaissance, with Bruse Campbell as Rob Tapert and Hudson Leick as Liz Freidman.
Wow, so many great eps ...I need to buy this set!!

Season 5 was the last full year of Hercules - Season 6 lasted just 8 episodes. While there were some good episodes, it had been eclipsed by sister show XENA in a big way by season 5. The show took a dark turn and saw Herc explore abd travel further afield. They also killed off Iolaus!!! However, he did return - kind of!
For XENA fans, the one to look out for is 'For Those of You Just Joining Us' where Renee O'Connor finally gets a decent guest role as Sunny Day, a perky and bright camp counsellor where the jaded Hercules production team go in this follow up to last years 'Yes Virginia..' ep. Ephiny pops up in 'Sky High', while the follow up to last year's 'Stranger in a Strange World' is called 'Stranger and Stranger, but just doesn't work without Lucy and Renee!

Can I remind you, these are Region 1 DVD releases. If you don't live in the USA, please make sure your DVD player can play these discs before ordering, or alternatively, scroll down the page a bit, and see the UK DVD releases available.

Hottest shopping item right now is the new XENA book from Titan, Xena Warrior Princess: Complete Illustrated Companion by K Stoddard Hayes, March 26th. It's retailing at £14.99 but Amazon are doing it for £10.49. Order it NOW at Amazon.co.uk

Doesn't appear to be listed on Amazon.com you US buyers, so you better order from Amazon.co.uk too!

Biggest excitement for US buyers(and all DVD fans) is the imminent release of Season 1 on DVD by Anchor Bay. It is a cause of some anticipation - at last, XENA with a *proper* retailer! There's also the prospect of some decent extras too - maybe.

Due for release on April 29th 2003 according to Amazon.com, why not order XENA Season 1 on DVD from Amazon.com

Still want to support Xenaville and shop more?? Well why not check out the many many XENA Books you can buy from Amazon and the other shopping you can do.