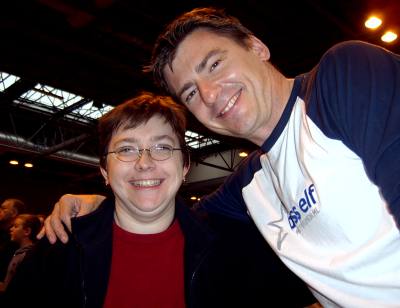 Kiwi actor Mark Ferguson appeared in the film, 'The Sinking of the Rainbow Warrior' with a young Lucy Lawless. A notable early TV appearance was in the classic Aussie daytime soap, Sons & Daughters as Paul - a good boy!
He appeared in the original Hercules TV movies and in several Xena episodes.

He was first seen in Hooves and Harlots as Krykus the warlord, a role he reprised in Remember Nothing. Mark was next seen in Orphan of War as Dagnine, yet ANOTHER role he reprised, in S4`s Past Imperfect. Mark also appeared in the S2 clip show, The Xena Scrolls as another baddie, the English cad, John Smythe.

Mark has been seen on New Zealand TV as presenter of reality shows The Mole and Big Brother this year. He also has a role in the forthcoming 'Lord of the Rings' movie.