Producer Liz Friedman worked for Rob Tapert and Sam Raimi on Army of Darkness and other Renaissance Pictures productions like Darkman and the Hercules TV movies. She was a producer on Hercules aswell as Xena and contributed story ideas for both shows. Liz is probably most notorious for being portrayed by Hudson Leick in two memorable Hercules episodes. They were comedies about the production team - Yes Virginia There is a Hercules , and For Those of You Just Joining Us. 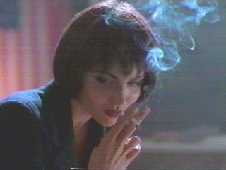 It is also Liz Friedman who was responsible for the introduction of the funny disclaimers on most of the episodes. Liz and coordinating producer Bernadette Joyce did most of them.

Liz is also an out lesbian, and her influence on Xena was appreciated by fans. She was also the subject of one of Lucy Lawless' jokes during an interview with the gay magazine "The Advocate" (August 20, 1996.) about Friedman, The Advocate reported the following.
"Liz Friedman is gay?" cries Xena star Lawless. The glamorous six-foot-tall New Zealander, so unshockable as Xena, lapses into stunned silence. Finally - after a nerve-racking pause - Lawless hoots with laughter: "If I`d only known! She`s the first woman I`ve worshiped! I`d crawl 40 miles through broken glass just to wank off in her shadow!"

A slightly sanitised version of this joke appeared in the episode Been There, Done That.

Liz left the show at the end of the fourth season, for an executive role in charge of development for Renaissance Pictures.

Liz co-wrote the story for S4`s A Family Affair. She and her writing partner Vanessa Place have worked for a number of shows such as Timecop, and return to XENA for the Season 6 episode To Helicon and Back.

Liz has written for many top TV shows such as Law & Order: SVU, The OC(as story editor) and Numb3rs. She joined the production team of the hit show House during its second season and has written two epsisodes so far.