Photos
Click on the thumbnails to see larger photos

Con Report
The convention kickied off on Saturday with some videos - the main interest being the Pasadena video of Lucy Lawless and Renee O'Connor onstage. I was at Pasadena, and it certainly brought it all back - but with a better view! The video looked great, and we saw a few bits of an interview done one-to-one with Renee (and Lucy briefly) that gave even more information. A must buy, and the news is that the footage has been approved by the actors, so its just the studio now I think. Put my name down for one right now!

The other fascinating bit of film were the Season 6 bloopers. Thinking they were the same ones we saw at Pasadena, I was not being as attentive as I should have been, and almost missed the opening shot from The God You Know bath scene, and Lucy doing some toe sucking! Not sure whose toes, but who was IN that bath...?? There were a few new bloopers that weren't shown at Pasadena, so another reason to get those fan club kit orders for next year.

The guests for Saturday were Vicky Pratt and Claire Stansfield. First up was Vicky, and she was very relaxed and friendly. She wasn't asked that many questions about XENA, and she spoke more about her new show 'Mutant X', which is being filmed in Vancouver and is an X Men TV show. She did her own trivia quiz at the beginning, giving out signed pictures as prizes, although they were a bit heavy on the Cleo content for most of us!

Claire Stansfield was up next, and her first line ("This is so f*cking great") showed she was in her usual cursing mood! Gossip time, as she started by telling us she was newly single - splitting from her boyfriend Ahmen Zappa (Frank's son) and how when she told Lucy, Lucy immediately said, "thank goodness for that, he was all wrong for you". She also mentioned how she found Rob Tapert rather intimidating, and it was a bit wierd as Lucy was one of her best friends but her husband was Claire's boss. Interestingly, Claire spoke about her experiences onset as always being quite serious, and she didn't have any funny stories. Alti's episodes were often fairly heavy I suppose. She mentioned how Lucy stole one of her dresses in When Fates Collide! Alti was due to wear the gold dress - the one that Xena wears watching Caesar and Alti - but when Lucy saw it she wanted to wear it. However, Claire was happy enough. She said it was made of a sort of mesh material that actually grabbed all your body hairs in a most uncomfortable way, so Lucy wasn't terribly comfortable!
Claire spoke about her directing - working with Claudia Christian and Alex Tydings on Claudia's Taboo video, and a few of the crappy movies she has made. She was asked about the season finale, and her views on it. She seemed well aware that some fans were not keen on the ending. She didn't commit herself totally, but expressed some sympathy for the point of view that it wasn't the ending many people wanted.

The autographs sessions were next and despite Creation trying to hurry people through, Claire and Vicky still made a point of chatting and personalising autographs.

Saturday night was Claire and Alex's Triple X Revue, and as at Pasadena, it was an evening of fanfiction readings. The girls were dressed in fairly sleazy undies - in honour of being in New Jersey they said!
The program was pretty much the same as at Pasadena, with a few new stories in a similar vein. One of the stories was a Friend in Need whiny one, which got laughs mainly because Claire and especially Alex had NO IDEA how to pronounce Akemi, Higuchi, Japa and other FIN related words! "Did you watch it?" a few good natured yells went...
personally, I think they could have done with a few other things for an eveing cabaret. Maybe Vicky Pratt and Tsianina Joelson could have done a few flips for us or something? Maybe Alex could have done more Irish dancing? 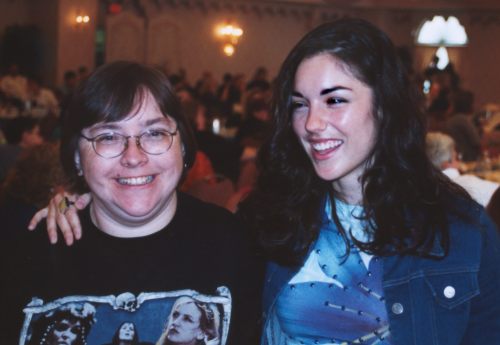 Sunday began with the Charity breakfast - a fund raiser for the James Ellis foundation, a charity that supports cancer patients and their families. The cause is a good one, and all the guests were in attendance. If you get to a Creation con, try and get to these. It is your main chance to get near the guests and get photos. The food was also pretty good - although the coffee was terrible! You sit on a table of about 10 people - a great way to get chatting - and the guest are brought round. We spoke to Tsiania Joelson and Vicky Pratt right near the start - and very nice they were too. There was a long wait before Alex and Claire came to our table, and we were rushed along, barely getting any decent pictures of Claire at all. Not sure if I should spread gossip but apparently Alex Tydings is going through a divorce right now! Amazing how these things come up in conversation..(thanks Mia LOL)

The main events got going in a slightly shrunken main hall. An Indian wedding was taking up the other side of the hall. Wonder if they heard our noise? Anyway, we saw more of the Pasadena Con video with Lucy and Renee (I want one NOW), and some other bloopers and music videos.

The first guest was Tsianina Joelson. This was only her second con, after Pasadena, and she was very sweet, although didn't have a lot of detail to give about her work on the show. She was asked about her fights with Renee in Path of Vengeance and working with Renee as a director and gave fairly brief "it was great, she was great" answers. She laughed when asked about why Varia didn't take off her blindfold in To Helicon and Back - her hands were chained in FRONT of her after all! She said that she thought the exact same thing, and that people would think she was an idiot. However, they had already done some of the other camera work so they had to do it that way. She also had a good story about her win in the Miss Fitness America (or something) a few years ago and how she never thought she would win it. She has just returned from filming in Europe where she got to see the pyramids which she enjoyed a lot. Her most painful story was from filming Path of Vengeance. She was doing a fight scenes, and there were large poles rather close behind her when she was throwing punches. She had to swing her arm around, and it hit this pole, dislocating her shoulder. The momentum was such that the shoulder popped back in, but she was in some pain! However, they did give her a few days off to recover..the things you DON'T see!

Before Alex Tydings came on we had a new Aphrodite video to Bananarama's 'Venus'. Alex clearly enjoyed it, and came bouncing onstage in a mini kilt and bunches. She was the most energetic and pumped up of all the guest, and her talk just flew by. First she rang her mum on her cell phone and we all had to yell hello. She then spoke for a long time about the show she and Claudia Christian are developing that sounds like a cross between Time Tunnel, Quantum Leap and Relic Hunter. Called 'Hourglass', its a fantasy adventure where she and Claudia play two scientists who travel in time to significant moments in history. She also spoke about filming Claudia's Taboo video. From what I understand, it's Claudia singing, and the video was directed by Claire Stansfield. Alex was persuaded to do some Irish dancing - something she wouldn't do in England in May! - and spoke a little about how she was really looking forward to doing the XENA musical episode Last Dance that was shelved after clearance problems over the songs. Alex loves dancing, and was disappointed, although we all agreed Many Happy Returns was fun too.
Alex's time seemed to go far too quickly, and after auctioning off her Taboo video for an amazing $3000 she was off. Incidentally, they had auctioned Claire and Alex's hats from the cabaret earlier for $1000 each. The proceeds from the hats and video went towards the charity, which was nice.

We finished with the fancy dress contest and a deserved win for an excellent Cupid, and an adorable little girl dressed as Aphrodite was one of the kiddie winners. Creation were even fussier about autographs, so we couldn't get them personalised (grrrr! Those gold tickets are damn expensive you know.....) Still, at least everyone who wanted one, got one (I think).

A fun weekend, with excellent guests and as always most of the fun was in chatting/meeting other fans, Xenafans are a friendly bunch. This was only my second US con, but I enjoyed it a lot.

Thanks to Mia for sharing her photos, the accomodation and driving instructions!

A few pictures of the Xenaville gang....