Click on the thumbnail to see a bigger version

First off, thanks to bad navigating, I arrived a little late at the hotel, and missed most of Musetta's talk - kind of annoying when there are only two guests. However, I believe she was asked about her range of Sci-Fi roles - 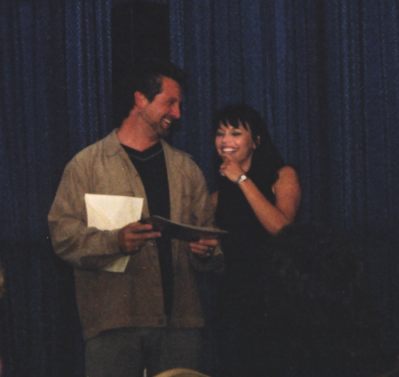 Musetta has been in many of the top Sci-Fi TV shows, such as XENA, Stargate SG1, Buffy, Star Trek Voyager and Babylon 5, as well as movies like "Wild Wild West", "Mortal Kombat", "The Cell" and the Cohen Brothers' "O Brother Where Art Thou". Musetta mentioned how in her very first fight scene on XENA in her episode Amphipolis Under Siege, she tore her hamstring badly. Despite the pain, she still did her fight scenes however! There was also mention of the subtext between Ilainus and the goddess Athena, played by Paris Jefferson. Apparently Paris had a few ideas about how they could play it Musetta came across as very intelligent and interesting.

Musetta was celebrating her birthday on Saturday, so we all gave her a card and sang Happy Birthday! She was there with her husband Jeff Celentano, who is a movie director. Jeff was drafted in to give a talk during the weekend also. Again, I missed most of this talk (what WAS I doing there??), but caught a bit where he was talking about how nasty he is to the crew he works with..not sure how serious he was.

The main attraction for many of us was seeing Alexandra Tydings, who plays the always delightful Aphrodite. She spoke about working on the episode Punchlines, and how all of her bits were filmed over 2 days. She had finished filming on another episode on Friday afternoon, they gave her the scripts for her bits on the Friday night, and she filmed with Renee O'Connor on the Saturday and the Monday. Alex said how much she enjoyed working with Renee, and how she loved that worm bubble bath. She also enjoyed Aphrodite getting a few big words in that episode!

She spoke about working with Renee again on Little Problems. The scene where she and Renee pose as twins was one she remembered well. They were tied together with a big piece of elastic according to Alex! She said that she loves to do funny accents, and enjoyed trying out her Swedish. Renee is less keen on accents, so she was trying to show her how to do it. The scene where Aphrodite and Gabrielle's helmets get tangled together was, of course, an accident, but the take they used for the episode.

Another episode she discussed was If the Shoe Fits. According to Alex, the little girl in that episode (Olivia Tennet) was one of the most focussed and professional actors she's ever worked with! However, her tiny little voice couldn't be picked up by the microphones very well, so they had to put a microphone in her wig to pick up her voice!

Still on episodes, Alex spoke about the Hercules episode Stranger in a Strange Worldand the infamous cake fight between her and Lucy Lawless. Alex said this was the first time she had met Lucy, and also her first fight scene, and she was rubbish at it! Lucy did her punches in one take, but it took Alex several goes. The actual cake was one of a kind, and a real cake. She said that she was determined to win - well, Aphrodite WAS a goddess, and Xena a mere mortal. Alex said she grabbed two huge handfuls ready to chuck at Xena, but when she turned around, Lucy had grabbed a whole tier of the cake ready to throw! After filming this fight, she and Lucy had to be hosed down - something that happened to Alex after filming the Hercules episode where she played Katharine the Pig aswell.

Alex' description of her experiences on Married With Fishsticks were mainly about the underwater acting required. She had just got her scuba diving qualification, but she said that it was still pretty weird being weighed down in a huge tank of water.

The God You Know is Alex's favourite episode to work on. She said that after the first days filming, she and Alexis Arquette and director Garth Maxwell (or Garth Brooks as she called him!) went out for a drink, and she get talking all about her ideas for what Aphrodite would do - how she is addicted to Caligula. Garth asked her to write down her ideas, and most of them appeared in the heavily rewritten script. Alex said she always wanted to play a junkie, but didn't think she would get to do it on XENA!

Alex was asked about the cabaret act she and Claire Stansfield performed at Pasadena, where the two of them did readings from fanfiction. This was Alex's first con since then. She said it was ALL Claire Stansfield's idea! They wanted to do something subtexty - they thought the fans would like it, but they had no idea how much. Claire Stansfield got some people to help her find Xena Fanfiction, and spent a long time reading some before choosing some stories. Alex was asked about whether the authors minded. "Are you kidding, they LOVED it" was her reply! She did say that they had not contacted all of the authors in the week or so before the convention, and how it was quite weird that they had to search the Internet to try and find the authors! She confirmed that they plan to perform again.

Alex spoke about "frock day" on the Hercules set. Anyone who has seen the Behind the Scenes video from the XENA fan club will have seen what this was. It's one day when everyone comes in their best frocks to the set - especially the male crewmembers! Alex mentioned how expert at it Michael Hurst is. He came in a full Princess Diana outfit one time; compete with pearls - and shoes that fit, much to Alex's amusement. (Men who have ladies shoe's in their own size..hmm)

However, a scandalous piece of news followed. The Kiwis claim that this tradition of "Frock Day" is a British thing that they adopted! Those liars! Definitely not from us..

Alex spoke about the Sheena episode that she filmed recently. It was the only time she has been offered a role that she hasn't had to audition for she said, thanks to former XENA writer Steven L Sears, who produces Sheena. Also in the episode is Mira Furlan (Delenn from Babylon 5), and it was directed by Mira's husband Goran. Alex plays a thief with a heart of gold.
We also saw some clips of Alex in a pilot show she has filmed, where she does an Australian accent. Slightly dodgy one actually..

I asked Alex about her Irish dancing - something that is very popular in some parts of the UK. Alex said she came to London to take part in the All England championships when she was very young and actually messed up half of her dance. However, they can't have been looking too closely as she came 5th. These are huge events, so this was some achievement. She also took part in the World Championships in Galway. She said she hasn't done any Irish dancing since she was 20 and had a lot of Guinness. Sadly she couldn't be persuaded to dance for us - although we got the final pose!

Alex came across as very bubbly and lively - although I hear she wasn't feeling too well. The audience were very quiet and subdued - which was a feature of this con. There were not many people there at all - barely 60 or 70 I think. I am not sure whether the guests found this a relief or a bit too quiet.

There was a charity auction - very reasonable priced items too, and the usual photo and autograph sessions. The whole day was very relaxed and quiet. I even managed to bump into Musetta Vander in the Ladies and have a chat over the hand driers! Those automatic ones are tricky to get the hang of...

I wasn't there on Sunday, but I hear there was more of the same. A Xena and Callisto lookalike gave an interesting talk on sword fights and Alex got some of the audience to take part in a read through using the Hercules episode, "The Apple".

Thank you to the organisers. Shame there weren't just a few more people there.

If you have a con report from Dionysia that you would like to send me, or link to, email me!