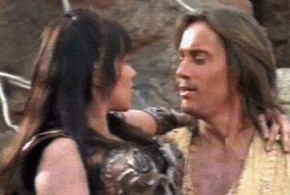 A New UK TV Home for XENA and HERCULES!
Xena and Hercules move to BRAVO and other bits of news...

The Cult TV website reports that XENA and HERCULES will go into twice daily repeats on UK cable and satellite channel BRAVO in August. Bravo are clearly increasing their US action show content as MacGyver and VIP are other recent acquisitions. Incidentally, HERCULES star and XENA director Michael Hurst will once again be at the Cult TV event in October.

What better way to start your day than to wake up every morning with an exotic beauty? And what if that exotic beauty was wearing leather? If that, by any chance, appeals, then Bravo has Xena: Warrior Princess at 9.50am every weekday morning this August, with repeats at 6.05pm in the evening. Xena (Lucy Lawless) and equally pretty Gabrielle (Renee OConnor) travel through ancient lands on a mission to defend the powerless. With formidable strength, cunning and fighting skills, Xena battle's with the gods, tyrants and mythological monsters, including the god of war, Ares (the late Kevin Smith), that threaten her world.

Meanwhile, Hercules: The Legendary Journeys joins Bravo scheules for weekends, from Saturday 2nd August at 2.15pm, with repeats at 7.00pm.

Hercules is the son of Zeus, the father of the Greek gods, and a mortal woman, and this is a story of a time long since gone, an age of myths and legends, when the Earth was new and the gods had a pretty diabolical sense of humour. Powerful monsters and mythical beasts roamed the earth and mankind's plight was often not a happy one. Until Hercules arrived, that is. Big in stature, big of hair and even bigger of heart, Hercules took it upon himself to use his legendary powers for good.

This modern take on a classic tale features flashy gods, strange beasts, huge action sequences and a definite tongue-in-cheek sense of humour. However, towering good guy Hercules (Kevin Sorbo) wouldn't be half the man he is if it wasn't for his friends. Luckily, he has a brave but impetuous sidekick in Iolaus (Cult TV Festival guest Michael Hurst), who is often on hand to help him save the day.

Bravo has also secured six super-heroic series of this immortal tale. So, you'll be able to join Hercules and friends on their first fledgling journey, as Hercules must overcome his thirst for revenge when a jealous Hera, the much-wronged wife of the philandering Zeus, callously slays his family in a ripper of a bad mood! Then, follow them right up to the moment when they must save the world from the Titans, ancient and powerful enemies that not even the Gods can control.

Also inhabiting Hercules' world is a group of recurring thorns in his side. These include Autolycus, the wry and devilish King of Thieves (Bruce Campbell); Aphrodite, the flighty and mischievous Goddess of Love (Alexandra Tydings); and Salmoneus (form Cult TV Festival guest Robert Trebor), ancient Greece's equivalent of a travelling salesman.