Renee O'Connor as Lady Macbeth? Sounded unlikely, but Xena fans have been brushing up their Shakespeare and heading to the Los Angeles beach area to catch Renee as LadyM this summer. Me included!

The 26th July performance was at a place called Valley Park in Hermosa beach. The park was a very pretty place with a small amphitheatre overlooked by grassy banks. After US Airways lost my suitcase, I was camera-less and relying on others to get those all important shots, and huge thanks to Vince and Joann for their photos!

We arrived nice and early, and there were already several people there at around 4pm. Pretty much all XENA fans.

We spotted a group of what looked like actors sitting on the park benches chatting. Was that Renee in the green T shirt? No, she looked much too skinny... However, a quick walk past revealed that it WAS her. Pretty soon after that they started setting up, and as we had heard, the actors helped put up scenery and set up the lights and sound system. Photo opportunity! Is this a staff I see before me?? (Well no, its a bit of scaffolding, but we liked the photo.) As the crowds began to build up and performance time approached, the actors disappeared. (Maybe Renee went off to do her yoga or yell to the ocean or something..) The preshow entertainment began, with the actors leading a shouting contest (our group won.) Renee and 2 other actresses came on to do their bit. Renee was a bit hoarse and sounded deep and croaky all night actually.

The play itself began on time, with a couple of hundred in the audience. The sun was starting to set, the park was beautiful, Renee O'Connor was a few feet away from me...ah, this is the life! However, once that sun DID go down, it was bloody freezing! Chilly sea breeze, so much for hot California! I hadn't seen a US production of Macbeth before - only the Royal Shakespeare Company for me dahling! I wondered how they would speake the verse. Shakespeare's verse is not easy, and thankfully there were no attempts at a plummy English accent, although Renee had an odd twang at times. For some reason they all pronounced the words "Scotland" and "milk" in an accent. The guy playing Macbeth, Patrick Vest, was full of energy and leapt around acting his socks off! He clearly was very used to speaking the verse and conveyed the meaning of the speeches quite well I thought. The best thing about the production was the way the three witches were portrayed in my opinion. They were very wierd and spooky and not three old women, but two girls and a man! 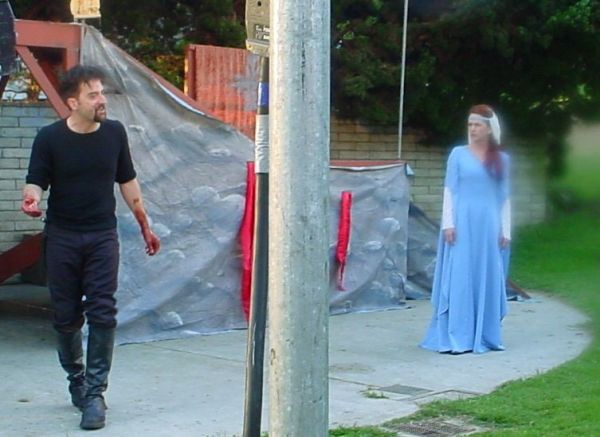 So how was Renee? While Lady Macbeth is a challenging role, it is not that big a part, with only a couple of major speeches. Renee definitely had the best costumes! Nice flattering dresses - and yes, she IS pretty skinny! She had hair extensions on her shortish dark hair and looked great. Considering this is her first stab at Shakespeare, she did pretty well on the whole. It was just so amazing to be sitting a couple of feet away from her though. After all these years of watching her on XENA, to be that close and making eye contact with her was quite surreal.

The second act was very Renee-lite. Just the sleepwalking scene and getting carried around while dead. As the play ended, the scramble for meeting Renee began. I have heard some rumours that XENA fans have been besieging Renee a bit, maybe that explains the rather heavy handed way the Shakespeare by the Sea people rushed us through. Yes, there were quite a few people wanting to see Renee, and yes, they didn't want to be there all night, but I think they have been getting tips on crowd handling from Creation. I didn't get a chance to say more than "enjoyed the show, thanks" before being hustled off, and one of my friends got shoved out of the way by the staff. I suppose it is hard to get the balance right, we didn't want to be waiting around for ages because everyone was chatting to Renee, but being treated like cattle is not on either. Then they were complaining because I took some photos of Renee while she was talking to others. WHY??? What did it matter to them or to Renee if there were two flashes going off instead of one?

Anyway, I got my autograph and photo, and I was thrilled to meet Renee, however briefly. To be honest, I thought Renee seemed a bit tense during the meet and greet. I suppose having a bunch of XENA fans after you is a bit worrying, and she hasn't done any conventions involving actually talking to the fans in years and years.(Plays and interview by Sharon Delaney at Pasadena don't count..) I have no idea what Shakespeare by the Sea's average audience was last year, but I bet a good 25% or more were there almost solely to see Renee O'Connor. It must have been quite daunting for her, to know that a significant proportion of the audience were scrutinising her so closely. Hopefully, she also found it encouraging, that people enjoyed her work so much, they would travel (in some cases, thousands of) miles to see her act and to support her.

Thanks to JoAnn and Vince for the photos