Born Evelyn Renee O'Connor, Renee began acting a very young age. Early appearances include MacDonalds adverts and the Mickey Mouse Club. Renee appeared in a number of not very good tv movies, and one fun one - a new Rockford Files tv movie, where she was excellent in a funny role as a self absorbed actress receiving death threats. She was cast as Deianara in Hercules and the Lost Kingdom, the second (and best) of the Herc TV movies, where she was very good indeed. Shortly afterwards, she worked for Tapert and Raimi again in Darkman 2, before landing the part of Gabrielle in Xena: Warrior Princess. Renee married her long term Kiwi boyfriend Steve Muir in October 2000, and in September 2001, she gave birth to their first child, a boy named Miles William. March 2006 saw the birth of her daughter Iris Sura.
Renee showed an interest in directing, and shadowed TJ Scott during the filming of Adventures in the Sin Trade, in which Gabrielle did not really appear. She went on to direct the final episode of Season 4, Deja Vu All Over Again , and Season 6's Dangerous Prey.

Post-XENA, Renee has done very little professionally. She boldly took on the role of Lady Macbeth in a production of Macbeth by small LA theatre group "Shakespeare By the Sea" in summer 2002. She has appeared in very few things on screen. "One Weekend a Month", a short film that was shown at Sundance was pretty good. On the other hand, "Alien Apocalypse" directed by Josh Becker with Bruce Campbell in the SciFi Channel in 2005 was appallingly bad!
Renee has been involved in a project called "Diamonds and Guns" for what seems like about 5 years!

She has continued to be active in the XENA fanworld, attending conventions and producing artwork. She now lives in LA, and had a baby girl in March 2006. 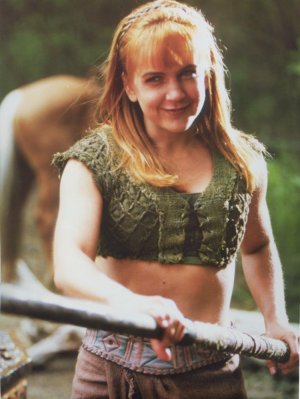 Gabrielle is the character who has developed the most in XENA. She began as a young innocent village girl with a taste for adventure. She was just a bit annoying and always getting into scrapes. However, halfway through season 1, Gabrielle became an Amazon Princess after trying to save another Amazon. She fought with a staff for a long time after that.

Gabrielle was engaged to Perdicus the opening Xena episode, Sins of the Past, but left him. However, he returned in Beware Greeks Bearing Gifts, and again in Return of Callisto where Gabrielle married him. A short lived marriage however, as he was killed by Callisto, much to the relief of Xena fans!

Later series have many more dramatic changes for Gabrielle so that she is hardly recognisable as the young girl from season one. The Deliverer is one of her most traumatic episodes, where Gabrielle was tricked into killing for the first time, and was then impregnated by an evil deity named Dahok. In Gabrielle`s Hope she gave birth to Dahok`s daughter, foolishly named Hope! Sacrifice 2 saw Gabrielle apparently sacrifice herself to save Xena, but Gabrielle lives on (surprise, surprise) and returns in Season 4's A Family Affair. Her survival is never properly explained.

S4 of XENA, saw Gabrielle searching for meaning in her life, and choosing a path on non violence, after meeting Eli. Not a good idea for her, as Ides of March saw her and Xena crucified by the Romans. Season 5 was one where Gabrielle warrior side came out. With Xena pregnant, she took on the more active role quite frequently.