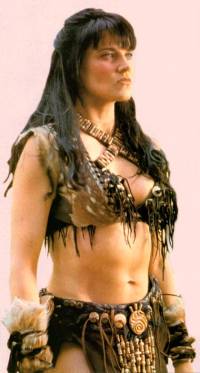 
Xena becomes the ultimate prey for the deranged Prince Morloch (Sandy Winton), who has been hunting and killing Amazons in his twisted quest for an adversay who can match his skills. Meanwhile, Xena teaches Varia the value of listening to the voice of experience. This episode sees the return of the Amazons, Varia and Marga, seen in the opening episode of the season, Coming Home. A Gabrielle-lite episode because Renee O'Connor was directing.

Sofrina`s Summary
Xena becomes the prey of Prince Morloch, a hunter whose skill and strategy match her own right down to pressure points and a chakram-like weapon. With hotheaded Varya as sidekick, Xena sets out to save the Amazons from Morloch`s predations. [Renee O`Connor directs this perfect episode; incredible stunts; those flying kicks from "The Matrix;" and that cool adventure music from the episode "The Abyss."]

DISCLAIMER: Raczar mysteriously disappeared at the completion of production of this motion picture and is rumored to have been living under the guise of "Prince Vhalimar Barbiqueen Raczar of Lower Alibabaston"