Welcome to my UK Xena Page, that will hopefully (surprise, surprise!) give a UK slant.
Here in the UK, Xena:Warrior Princess is still a cult show as it is tucked away on a satellite channel and the relatively new and still least watched, Channel 5.

Did you catch Lucy Lawless on the ITV Comedy Awards back in December? A brief but funny appearance. Well as I now have a TV card - although it is playing up a bit - I have lots of pictures and the transcript right here! Important news, The Symposium that was to feature Alexandra Tydings and Claire Stansfield on September 3/4 has had to be cancelled as Ms Tydings has been asked to go to New Zealand to film two Xena episodes. Lucy Lawless' pregnancy has meant a bit of shuffling around I believe. A shame, but unavoidable. For more details, check out the By The Gods website.

Once again XENA got an Emmy nomination in the music category. Joe Lo Duca's score for Devi is the nominated one. Scandalous that it is only music and costumes(I think) that they are eligible for due to the US network/syndication business. Anyway, good luck to Joseph Lo Duca.

The very latest news from the Xena set in New Zealand comes from the Entertainment Tonight web site where there is an interview with the pregnant Lucy Lawless. BEWARE - Season 5 SPOILERS!!
Screen grabs of the ET interview are available on MaryDs Aussie Xena site- THE number one Xena site!

Excellent news - according to Gareth, Universal are giving Xena:Warrior Princess a UK Video release!! 16th August should see the first tape with Sins of the Past and Chariots of War released. Expect a Star Trek style monthly release schedule...

NEW!! I have added some scans of the UK Maxim photos from this magazine. It's out now, and some of the photos are different.
More excellent scans at this site

Forbidden Planet has 8 new Xena Toy Biz figures in stock!! Four 6inch figures; a Callisto and ROC as Hope from Sacrifice, Gabrielle and the child Hope, a Debt Xena and a standard Xena. Incidentally, the Gabrielle is in that sheet from the beginning of The Bitter Suite, but I guess you have to drag it around yourself and get out your red felt tips for authenticity!!
The 12inch figures include an Amazon Queen Gabrielle, Ares and a Xena the Conqueror from Armageddon Now. They still look like Barbies to me.

The newest CULT TIMES SPECIAL#10 is one to look out for. Feisty Females is the theme and there is a significant Xena content to the magazine including a 4 season episode guide and a poster. I couldn't get one in the shops. There is a very good online ordering facility at http://www.visimag.com/vi-direct.htm. Costs just the price of the magazine and 80p postage.

SCI-FI TV magazine for July/Aug has a really good interview with Renee O'Connor where she talks about directing, her haircut and Gabrielle's development. There is a transcript available at MaryDs site

SPECTRUM magazine has a lengthy Bruce Campbell feature this month.

The episode The Way, will not be seen in the UK and worldwide as Renaissance Pictures have released a statement saying that as a result of Hindu protests about the depiction of Krishna they are pulling it from circulation. Read the whole story at this web site
If you would like to sign the online petition to protest about the banning then go right here.

On 18-19th September 1999, there is the STARFURY 99 Con, which has BRUCE CAMPBELL, TED RAIMI and ROBERT TREBOR as guests!
Do visit the web sites for more details and try and support this UK event..

New to this site - my new scanner means I have some lovely new pics on my Images Page.

Don't forget to vote using my quizlet - now updates with a new question.


Check out the Viewing Figures, and the new Series Two Ratings

, including the show's HIGHEST EVER UK rating!

Trot along and visit Argo's Guide to Greece

My Season 4 episode guide is available.

Dear Lila
well, now Xena isn't the woman she was! What a traumatic few weeks I have had. You'll never believe the latest. Xena is now trapped in the body of the evil psycho who killed my husband! Yeah, it's all true! I think we shouild be on Oprah or Jerry Springer. As usual it is far too complicated to explain, but now there are two skinny(ish) blondes here, and I don't mean Argo!
love
Gabrielle 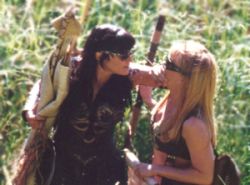 "No! Don't say a word, I just KNOW these eye shades will catch on in a few years time, you'll see!"

A busy week ahead! Sky One are showing episodes daily at 10am during the summer. This is as well as Wednesday evenings at 8pm. This weeks schedule:-

One not to miss is this Saturday's Hercules, featuring Renee O'Connor, Hudson Leick, Kevin Smith and Bruce Campbell. For Those of you Just Joining Us is another like last seasons Yes Virginia, there is a Hercules, where the stars play members of the production staff. Bruce Campbell IS Rob Tapert, Hudson Leick IS Liz Friedman etc etc. In this episode, Rob Tapert takes his staff to a sort of summer camp, where the counsellor is Sunny Day(Renee O'Connor). A very funny one.

No Xena next Saturday - one of Channel 5's "wonderful" theme weekends about dangerous animals or something. However, there are TWO Renee O'Connor tv movies and Alexandra Tydings(Aphrodite) in Red Show Diaries.

Tuesday 27th has a rubbish film called Sworn to Vengeance in which Renee appears for a few seconds only, however, you may try and spot her. It's on at 9.50pm I believe.
Of more interest is Follow the River on Wednesday at 9pm. Starring Sheryl Lee, Renee is VERY irritating! She does have a proper role though.
Thursday is the Red Show Diary with Alexandra Tydings. Not sure of the time. Late probably.

After many requests, ok, one...I thought this site needed a place where you, the visitors, could participate. Why not try out my brand new

Join in the discussion on all matters Xena. There is also this little voting booth and the question is....

Psst! Would you like to talk with other UK Xenites? A UK XenaNet has been set up so why not contact Ian Rentoul or Maureen Hayden to join up with other like minded nutballs!

Thanks to Peter and Shimmer for the various images appearing here. Thanks guys.

Why not visit my other sites