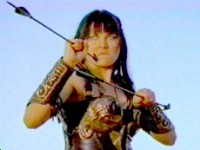 Xena gets hit by an arrow and gets a glimpse of the family life she has NOT chosen. She meets Darius and his three bratty children who care for her when she is injured. Being Xena - even this early Xena - she cannot stay passive for long and soon she is at the town meeting hearing from the warlord Cycnus and his son and trying to defend the people. However, the peaceniks believe Xena is causing trouble when they want peace. Xena knows better. The warlord intends to kill the villagers and it is up to Xena to stop him. Meanwhile Gabrielle is left on her own while Xena is injured and meets the warlord`s son Sphaerus. She kind of likes him,setting the trend of Gabrielle's awful taste in men. Xena (and Gabrielle) then save the peaceloving village from the evil warlord with a climatic chariot race battle.

Notes: Director Josh Becker mentioned how he came to write the story for this episode in his recent interview in the Xena magazine. According to Josh, this was a Hercules story he had that was adapted for Xena. This is one reason why Gabrielle isn`t in it much.

Warlord Cycnus is played by Welsh actor Jeff Thomas, better known as Jason (of the Argonauts fame) in HERCULES. There are photos available of Xena kissing Darius, but any kisses were removed from the screened version of this episode. Jack Perez, who co-wrote the story was the writer of the Hercules episode, The Gauntlet - probably the best of the Xena episodes.