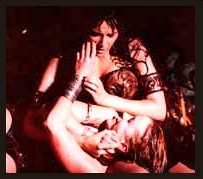 
Xena and Gabrielle are forced into a deadly confrontation with cannibals when they go in search of Virgil. One of the episodes that deals with Gabrielle`s attitude to killing, we see her dealing with the consequences of killing the young man, Korah, in the last episode. Xena is forced to draw on all her skills to save them all from another fearsome bunch of savages.

Sofrina`s Summary
When Virgil and the girls cross paths with a tribe of cannibals, it`s up to Xena to save the day. Meanwhile, Gabrielle deals with guilt over the boy she killed in Africa and Hope. It`s the return of the old Xena as she races against time to save Gabrielle from the breakfast feast and destroy the cannibals.

DISCLAIMER: Virgil`s appetite was suppressed during the making of this motion picture.