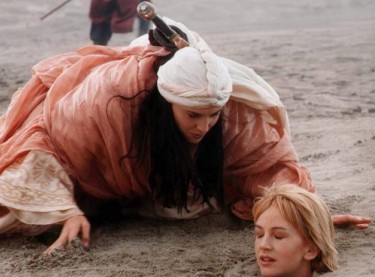 
Fanfiction writer Melissa Good`s second script (although it was the first she wrote and the first filmed) sees Xena and Gabrielle still in North Africa. They help two warring tribes in a fight against the Romans. Alison Bruce plays her third XENA character.

When Xena and Gabrielle meet up with two desert tribes, they become embroiled in a fight against the Romans. However, after a case of mistaken identity leads to Gabrielle killing the son of one of the leaders, she is sentenced to death. Can Xena save Gabrielle, yet help defeat the hated Romans?

DISCLAIMER:Despite severe air turbulence, no sand dunes were harmed during the making of this motion picture, although some experienced periodic bouts of motion sickness.