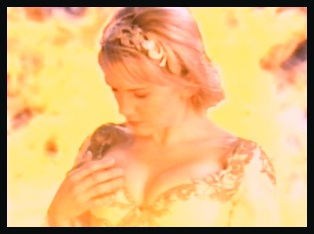 
The second episode of the Norse triolgy. Gabrielle, Beowulf and Brunnhilda discover a severely wounded Xena hiding from the beast Grindel. Xena explains her history with the beast, and how a magical ring is at the root of the problem. Later, Brunnhilda kidnaps Gabrielle and confesses her love for her. Xena and Beowulf, meanwhile, battle an array of villians who seek to take possession of the ring.

Sofrina`s Summary
Having escaped the monster, Grindel, Xena & Co. battle the monster for the Ring of the Rheingold as Odin and the Valkyrie plot to take it for themselves. Once again, Gabrielle becomes the pawn, in both Odin`s battle for power, and Brunnhilda`s battle for her love. Xena loses her memory, Gabrielle becomes the Sleeping Beauty, and Beowulf battles on. [Subtext heavy, excellent action and Gabrielle`s unforgettable declaration, "I never listen!" Part 2 of 3]

DISCLAIMER: Gabrielle`s popularity surged during the making of this motion picture.