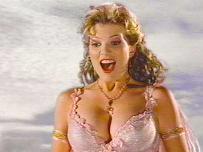 American actress Alexandra Tydings first appeared in the Hercules episode The Apple, directed by Hercules star, Kevin Sorbo. The was Tydings played her as a surfer chick come valley girl was an immediate hit with fans. She has appeared many times on both Hercules and Xena. Tydings, like many of the Hercules and Xena actors, had mainly done small roles on TV before working for Renaissance Pictures. Her role with the biggest exposure (in more ways that one) was probably on The Red Shoe Diaries.

Tydings was an Irish dancer when young. Fans frequently try and spot her tattoos! One around her right bicep (which we finally saw in If the Shoe Fits,) and one on her shoulderblade.

Aprodite is the half sister of Hercules. Very different from the mythological goddess of love, the Hercules and Xena version is a funny but capricious character. Her first appearance in The Apple on Hercules saw her cause chaos when she gave Iolaus an apple that made women fall in love with him. In her first trip to the Xenaverse, Aphrodite put a spell on Joxer in For Him The Bell Tolls, that turned him into a superhero when a bell rang.

While vain and selfish, nevertheless, Aphrodite is a kind hearted softie compared to the other gods, and has often helped Hercules and Xena.

For Him the Bell Tolls
Ten Little Warlords
The Quill is Mightier
Fins, Femmes and Gems
If the Shoe Fits
Little Problems
Punchlines
Married With Fishsticks
Motherhood
The God You Know
You Are There
Many Happy Returns