The God You Know 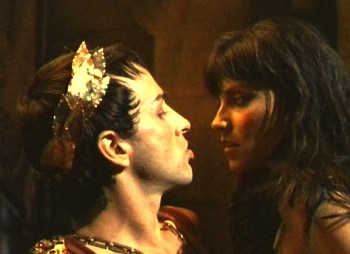 
The first of the episodes featuring Alexis Arquette as Caligula. Ares, Aphrodite and Eve also appear in this episode which sees Xena and Gabrielle return to Rome. The Archangel Michael (Charles Mesure) summons Xena to kill the now immortal Roman emperor Caligula (Alexis Arquette), who has been murdering innocents in his quest for absolute power.

TV Guide Online
The Archangel Michael asks Xena and Gabrielle to stop the evil - and immortal - Roman emperor Caligula (Alexis Arquette), who is slaughtering innocents. Afraid for her daughter Eve, who is in Rome, Xena agrees to the job. But her plan takes a bad turn when she learns Caligula has taken Aphrodite (Alexandra Tydings) as a sex slave. If he dies, she will die, too. To complicate matters, Michael manipulates Eve into becoming the bait he believes Xena needs to kill Caligula...

Sofrina`s Summary
Archangel Michael calls on Xena to stop new Roman Emperor, Caligula, a madman who has achieved god-hood. The girls arrive just in time to interrupt Eve`s execution, learning that Caligula is sapping Aphrodite`s god-hood and killing him means killing her. Things get tough when Xena is stripped of her god-killing power and Caligula saps the last of Aphrodite`s immortality. Lots of bare midriffs; Xena`s stunt double really outdoes herself; chariot racing; and Kevin Smith`s edible bare chest.

DISCLAIMER: Gabrielle's undercover disguise was extensively harmed during the making of this motion picture.