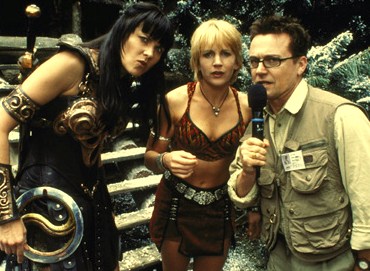 
In this hilarious comedy episode, a tabloid-TV reporter attempts to learn why Xena and Gabrielle have returned to Norse lands. His investigation leads him to suspect that Xena is plotting to kill Odin and make herself a god in his place. But his story takes a twist when a mysterious informant explains that the Warrior Princess is trying to save the world and that the reporter should follow the love if he wants the true story.

In an ancient world meets modern-day satire, a tabloid TV reporter (Michael Hurst) stalks Xena and Gabrielle, determined to get a juicy scoop on the Warrior Princess.

A comedy unlike any the show has ever attempted, look out for a star turn from Adrienne Wilkinson!

DISCLAIMER: The concept of linear time was severely harmed during the making of this motion picture