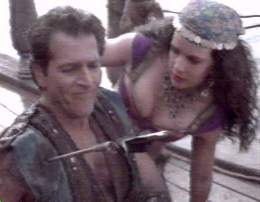 
Better known as Odysseus to his Greek pals,(or Useless-es to Xena fans!) Ulysses is a love interest for Xena in this not terribly convincing reworking of the tales of the famous Greek hero. Xena and Gabrielle finally meet Poseidon and visit the island of Ithaca.

Gabrielle gets very seasick while Xena out-sings the sirens. A competant but dull episode with a dreary guest star whose total LACK of chemistry with Lucy Lawless means we never believe it.

Notes: The Poseidon figure seen in the credits was created especially for that. However, the SFX for Poseidon were one of the best things about this episode. The voice of Poseidon was done by sometime director and actor Charles Siebert.

Disclaimer :-
Despite Gabrielle`s incessant hurling, Ulysses` ship was not harmed during the prodution of this motion picture.