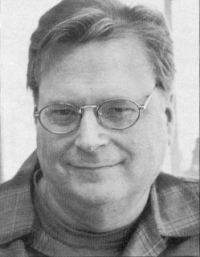 The top writer on XENA, RJ Stewart has worked in television for many years, working on the likes of Remington Steele. He is a native of Canarsie in New York City, but grew up around the world as his father was in the US Air Force. As a teenager in the 1960s, Stewart spent several years in Greece - something that stood him in good stead as a Xena writer.

Stewart originally wanted to be an actor but turned to writing after a number of years as a truck driver in LA. In 1982 he submitted a script that was picked up by TV producer Glen Gordon Caron, who hired him for Remington Steele on NBC. Stewart left the show after a single series, continuing to work for Glen Caron.

More tv and film work such as Major League II and a rewrite on the much criticised Waterworld followed before teaming up with Renaissance Pictures in 1995 as head writer in XENA. Although initially unsure, Stewart was immediately impressed with Lucy Lawless and her commanding presence.

RJ Stewart has a huge role in the creation of many of the Xena characters. As writer of the first episode, he did a lot of the work in creating Gabrielle, and Callisto was all his own work!

Stewart has written many of the best episodes ever such as Sins of the Past, A Day in the Life, Callisto, The Debt, Adventures in the Sin Trade and Ides of March.

Stewart took a back seat for the first half of Season 5 to concentrate on getting Cleopatra 2525 going, but Xena fans were delighted to have him back in his role as head writer and Executive Producer.

The recent Anchor Bay DVD sets have features RJ quite extensively, both talking about episodes and providing commentary.