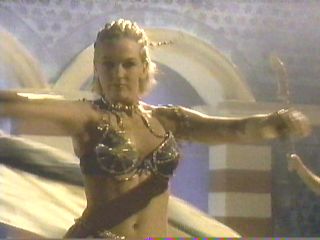 
As Xena, Gabrielle, Eve and Virgil hit Poteidaia, Gabrielle is shocked to meet a middle aged Lila, as she has some grim news about the fate of her family. Killed by a North African slave trader, she is determined to seek vengeance against the mysterious Gurkhan. Xena and Eve are both concerned for her. Xena gets herself sold as a harem slave to Gurkhan, but the plan is almost scuppered when Gabrielle also arrives as an undercover slave to try and get to Gurkhan. Xena is forced to make a move to prevent Gabrielle from being killed, and ends up getting a really nasty gory beating. (Directed by Michael Hurst remember..) However, she survives, and the dynamic dou eventually get to Gurkhan. Will Gabrielle be able to kill in cold blood..and where is her niece?

Fan club subscribers will find out more about the behind the scenes action as fan club president, Sharon Delaney has a video about the making of this episode for members. She posted this message some time ago;
"Who`s Gurkhan." I recently spent 9 days on set in New Zealand filming every aspect of the making of this episode. It covers the first readthrough of the script; early morning makeup sessions and porridge; wardrobe; props; set design; the choreographer teaching the actors dance routines; filming on board Rob`s Folly (that ship with the ubiquitous eye that has, sadly, been painted over); Tilly, Barbie, Mac and Zulu (who he?? wait and see ); Adrienne Wilkinson, William Gregory Lee, and Willa O`Neill (guesting on this episode); a prosthetic eye and blood in a dixie cup; harem girls and Turkish baths; pseudo North African body decoration and Gabrielle painting by the numbers (painting who? hmmm); exotic costumes; an Amazon village, Poteidaia and a strangely haunted Amphipolis; an incredible rainstorm; Renee kicking the stuffing out of a poor defenseless pillow; Mama Lucy and her bags of chips; and, reigning over all -- Michael Hurst as director. Michael is a wonder to behold -- especially on "frock" day!"

Recently it was confirmed there will be a 60 miute behind the scenes video for this episode. More from Sharon Delaney..
"All those burning questions are answered. What lipstick does Xena wear? What brand body wash do they use to turn the fair-skinned Lucy into dark and dangerous Xena? What does Renee have for breakfast? Get to be in the rehearsal room with the choreographer as Renee learns her dance. And peer into the dark shadows of the set as Lucy learns hers. And what do two friends do when they`re lying in each other`s arms on a stack of pillows waiting for the camera crew to set up? Share the hard work, the laughter and the tears that go into the making of the show. And if you`re not whistling "Baby Elephant Walk" for a week after watching the tape, you`re a better man than I am Gunga Din."

DISCLAIMER: Xena`s uncanny ability to recover from devastating wounds was not harmed during the production of this motion picture.