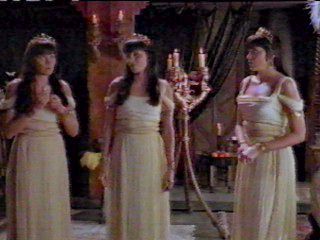 
Lucy as Xena again visits Lucy as Princess Diana with a new twist, another look-a-like, the rather dim and morally loose Meg! Joxer also appears as a potential love for Meg, which naturally gets very confusing.

The episode features King Lias, the father of Princess Diana very ill and Diana sending for Xena. The Xena that turns up doesn`t seem quite herself. For a start, Joxer tells of how she was VERY friendly with him! Then when Gabrielle turns up `Xena` has her thrown in jail! This is Meg, who is posing as Xena so her mentor Agis can grab control from the ailing King Lias. When Joxer arrives at the castle, he also is thrown in jail after fondling Princess Diana thinking she was Meg. Eventually Xena arrives to fix things, which involves disguising herself as Meg dressed as Princess Diana and pretending to be Meg dressed as Xena! Thanks to a masterful performance from Lucy Lawless, it is always clear who it is if you watch closely.

Notes: In a recent interview, director Josh Becker tells of how Lucy was able to keep track of exactly who she was playing at any one time even when the director and continuity person weren`t sure! He also says that it was Lucy`s suggestion for Joxer to proudly display a hickey from - who he thinks is - Xena.

Disclaimer :-
Neither Xena nor her remarkably coincidental identical twin, Diana, were harmed during the production of this motion picture. Meg, however, suffered minor injuries while preparing Aardvark nuggets for King Lias