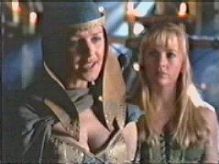 
Xena and Gabrielle meet up with a female crusader named Najara, on a quest of her own against evil. She seems like a valuble friend, and Gabrielle is impressed with her desire to help people and maybe open a hospice for the sick. Xena realises that Gabrielle might even be better off with Najara. However, she is not quite all she seems and Xena has a fight on her hands once again, and the female warrior is almost as good as she is!

NOTES:
Najara would return in The Convert later in S4. The fight scene between Najara and Xena was part of Xena`s vision that Alti gave her in Adventures in the Sin Trade. David Te Rare - better known as Callisto`s second in command, Theodorus appears here.

Disclaimer : -
Xena`s best chewing tooth was not harmed during the production of this motion picture