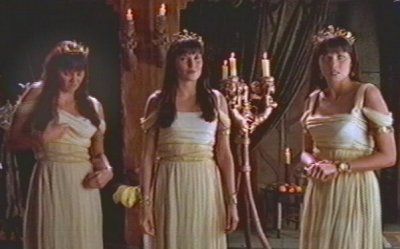 
More work for Lucy. Meg, Xena`s lowlife lookalike returns, this time running a bordello.(Look out for Jodie Dorday who plays the Amazon Solari as one of the dancing girls!) Also appearring is a Hestian virgin priestess named Leah (yep, Lucy again), who is having trouble with men attacking her temple. She also has a speech impediment- can`t say her `r`s. She needs Xena and Gabrielle`s help as someone is out to harm her temple of Hestian Virgins.

Notes: Yet another rendition of Joxer the Mighty is heard in this episode. Another lookalike episode, Warrior Poetess Tramp has been discussed for some time, but has not materialised yet, although Meg has popped up again in S4s Key to the Kingdom and S5`s Livia.

Disclaimer : -
Despite another Xena lookalike, the gene pool (or rather the gene puddle) was not harmed during the production of this motion picture.