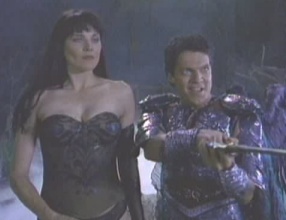 
Following straight on from The Haunting of Amphipolis, Xena has a visit from a handsome archangel intent on sending her down into hell to take on Mephistopheles' "King of Hell" job. At the same time, the portal to hell is causing darkness to take over people`s hearts - something Eve can magically (and convetiently for us) see. Xena is certainly behaving a little strangely, getting all chummy with Lucifer, the archangel. When an aggressive and flirty Virgil turns up with his eye on Gabrielle, it is clear there is big trouble. Xena`s plan - to get Lucifer to take on the role of ruler of hell - seems to have been forgotten as she and Gabrielle get into the wild and intoxicating way of darkness, which mainly seems to involve dominatrix style clothes and seductive behaviour with their men and each other! Will Xena manager to turn Lucifer into the devil....well what do you think??

Sofrina`s Synopsis
Having killed Mephistopheles dead, Xena is the Ruler Designate of Hell. Her refusal to go down to Hell, causes evil to leak out into the world and the Archangel Lucifer to plot to force her through the portal. Things get tricky as Xena and Gabrielle, corrupted by evil, plot to trick Lucifer into taking Xena`s place.

Lucy Lawless spoke about this episode in the Official Magazine recently;
"Xena`s got a problem," she explains. "She`s vanquished the king of hell, and unless she can find somebody to take over the mantle, she has to reign instead. Fortunately, Xena finds this archangel whose pride makes him a ripe canidate. So she`s out to corrupt the prideful angel. "It`s very exciting," she enthuses."

A script for this episode was sold on auction site eBay. When this has happened previously, the finished episode HAS been very different, but if you want to read parts and see a very nice photo, visit MaryDs page on this episode.

DISCLAIMER: All Hell broke loose during the production of this motion picture.